This article is using {{Card template}}.
See Help:Style guide/Card for how to edit this kind of article.
Edit this article
Oondasta
50459 • TRL_542
Regular 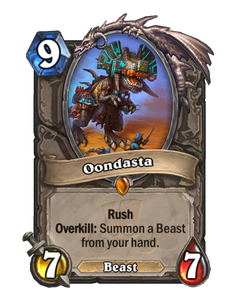 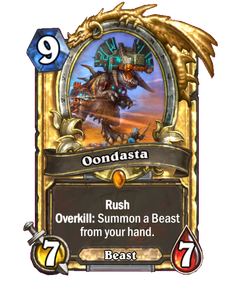 Adorning devilsaurs with armor and feathers is a respected job in troll culture, although it has a high turnover rate. 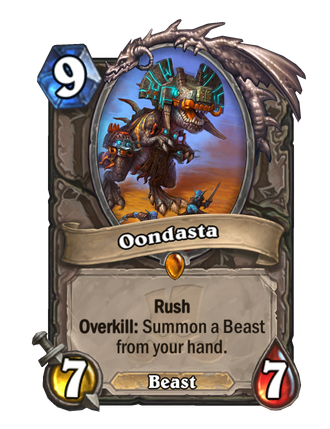 Oondasta is a legendary neutral minion card, from the Rastakhan's Rumble set.

Oondasta has below average stats of 7/7 at 9 Mana, which at a quick glance is inferior to

Charged Devilsaur, but it makes up for it with its Overkill effect. Ideally, decks that run Oondasta should include a few high-cost beasts to maximize its effect, such as the aforementioned Charged Devilsaur,

While Beasts are generally associated with the Hunter and Druid classes, remember that most of the legendary Loas are also beasts. Although most of them are focused on their Battlecry effects, some of them can get full value with Oondasta.

Akali, the Rhino is an extremely powerful minion to pull with Oondasta, who can also Rush into another minion for her Overkill effect. Both of them also benefit from

Spirit of the Rhino, which leaves your board with 12/12 worth of stats at the end of it.

Shirvallah, the Tiger is also an effective beast to pull if your deck is not able to meet her cost reduction threshold easily, although decks that can do so won't require Oondasta. As an odd-cost card, Oondasta can also be considered for decks that run

Baku the Mooneater, turning her from a poorly-statted dead draw into a free 7/8 body.

Oondasta is a devilsaur world boss found on the Isle of Giants, north of Kun-Lai Summit, on Pandaria.

Found in a place that has been lost in time, the great devilsaur lord Oondasta has been outfitted for battle with weaponry and armor by the Zandalari, and awaits players brave enough (or foolhardy enough) to seek him out on the mysterious Isle of Giants found in the seas north of Kun-Lai Summit.

From the World of Warcraft Adventure Guide
As the war against Lei Shen's island citadel began, Alliance and Horde scouts made an effort to intercept missives between the major Zandalari camps. One such exchange seemed to revolve around an unfamiliar Zandalari word, always surrounded by terms of conquest and power: Oondasta. Somewhere in Pandaria, the Zandalari Beast Ward raises their mighty beasts as engines of war, and is putting the finishing touches on this Loa-infused monstrosity. The exact location, however, remains unknown...