This article is using {{Card template}}.
See Help:Style guide/Card for how to edit this kind of article.
Edit this article
Onyx Bishop
39374 • KAR_204
Regular 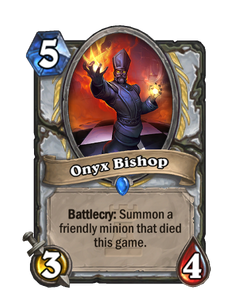 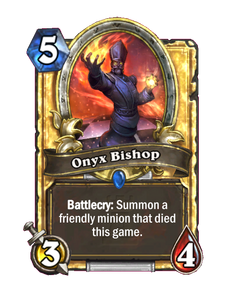 B4 is a nice place to visit, but he wouldn't want to live there. 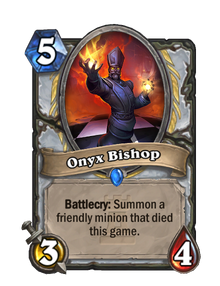 Onyx Bishop is a rare priest minion card, from the One Night in Karazhan set.

Essentially a 3 drop (with a decent 3/4 body) with a Resurrect effect attached to it. Often a good choice for tempo and board presence when played immediately on turn 5, as many popular early game priest minions often have important effects attached to them. Minions such as Northshire Cleric, Wild Pyromancer, Acolyte of Pain, and Auchenai Soulpriest are all popular early game priest cards that can alter the state of the board.

It is also worth noting that like Resurrect, Onyx Bishop revives the minion at full Health and without any enchantments, thus cards such as Injured Blademaster or Injured Kvaldir will be revived with their full base Health and not have their Battlecry trigger. This can prove a rather advantageous as the player will have essentially a 7/11 minion or a 5/8 minion on board for only 5 mana.

This card also has some synergy with Barnes, and to an extent, Herald Volazj as well. Since the 1/1 summoned copies are actual minions but with a 1/1 enchanment placed on them, Onyx Bishop will later on revive them with their full base stats. This opens up many possibilities of being able to play important late game cards several turns early. An example would be for Barnes to summon a 1/1 copy of Sylvanas Windrunner (which quickly dies or is removed), thus allowing for Onyx Bishop a chance of reviving a regular copy of Sylvanas, complete with 5/5 stats.