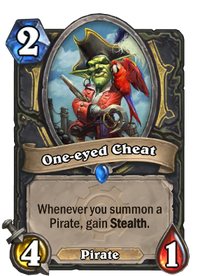 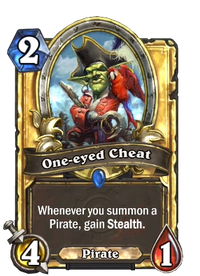 Whenever you summon a Pirate, gain Stealth.
Flavor text

When pirates say there is no "Eye" in "team," they are very literal about it.

One-eyed Cheat is a rare rogue minion card, from the Goblins vs Gnomes set.

One-eyed Cheat can be obtained through Goblins vs Gnomes card packs, or through crafting.

A valid strategy to use with One-eyed Cheat is to attack the enemy hero directly, then play a Pirate to put One-Eyed Cheat back into Stealth. Southsea Deckhand can be utilized for quick bursts of damage with One-eyed Cheat and to trigger its effect. Do not play this card unsupported; it is unlikely to survive a single turn. While this hit-and-run approach maximizes the One-Eyed Cheat's survival chances, be aware that his 1 Health means that any AoE damage will destroy him, as may effects like Arcane Missiles, Madder Bomber or Avenging Wrath.

It may be desirable to play this card in the early game against an opponent who cannot deal with it or be forced to play premium removal to get rid of it, such as a priest. A good strategy is to play One-eyed Cheat with Patches the Pirate in the deck, allowing One-eyed Cheat to immediately gain Stealth.

Summon
Yaharr! I'll hide in the back.