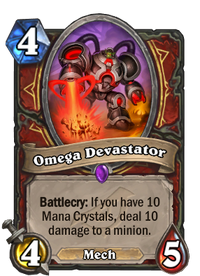 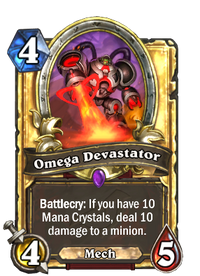 Battlecry: If you have 10 Mana Crystals, deal 10 damage to a minion.
Flavor text

Omega Devastator is an epic warrior minion card, from the Rise of Shadows set.

Omega Devastator can be obtained through Rise of Shadows card packs, or through crafting.

While Omega Devastator's stats are reasonable for a 4 Mana minion, it is at its strongest in the late game once you've accrued 10 Mana, as it is then effectively able to annihilate all but the sturdiest of minions. As such, unless facing an incredibly aggressive opponent, it's generally best to hold onto this minion until you've hit the 10 Mana requirement.

Being a Mech, Omega Devastator synergizes with all Mech-related cards. Dr. Boom, Mad Genius will give Omega Devastator Rush to allow it additional field control as soon as it's played; in addition, Delivery Drone has a chance of Discovering Omega Devastator, as does Omega Assembly. When available as a Discovery option in the late game, Omega Devastator will almost certainly be one of your best choices.

Being a Mech also means that Omega Devastator synergizes with all Magnetic minions. Unfortunately, though, its damage being a Battlecry means that you won't be able to take advantage of Zilliax to instantly gain 10 Health via Lifesteal. Still, Zilliax's Rush effect means that on a lucky turn you could play Omega Assembly, discover Omega Devastator and Zilliax, and use your remaining 9 Mana to destroy a minion, attack another minion, and gain 7 Health while clearing out your opponent's threats.