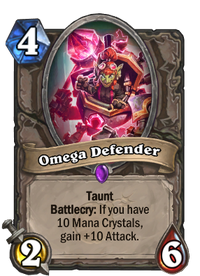 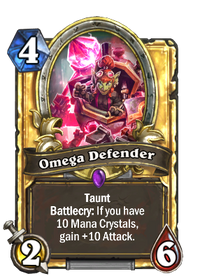 "Surrender. You have 10 mana to comply."

Omega Defender is an epic neutral minion card, from The Boomsday Project set.

Omega Defender can be obtained through The Boomsday Project card packs, or through crafting.

Effectively a Stegodon on its own, this card's value lies mainly in its Battlecry. A 12/6 for 4 mana is an extremely cost-efficient and highly threatening presence that cannot be ignored, as an Omega Defender left unchecked can inflict massive damage or kill a much more valuable high-cost minion. However, as this effect only activates at 10 mana, the opponent is likely to have a removal card or silence to answer it. This card's high threat and low mana cost in the late game can thus be used to bait out such effects from the opponent, leaving them with fewer answers to your high-value minions later on.