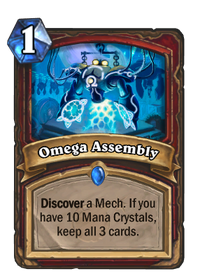 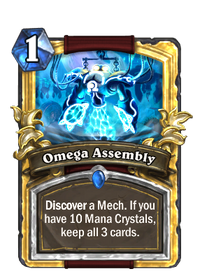 Discover a Mech. If you have 10 Mana Crystals, keep all 3 cards.

They told Dr. Boom he could only pick one. He disagreed.

Omega Assembly is a rare warrior spell card, from The Boomsday Project set.

Omega Assembly can be obtained through The Boomsday Project card packs, or through crafting.

A flexible card that can fill out your curve in the early game or refuel your hand if played with 10 mana. The range of Mechs is fairly wide but they tend to have internal synergy, greatly increasing the value of getting three. The card is also strong with Dr. Boom, Mad Genius, giving the minions Rush when played and turning even bad cards into potential board control. It is also a great card to duplicate with Dead Man's Hand, generating significant value well into the late game; with 2 copies of Dead Man's Hand, this will give you an endless supply of Mechs.