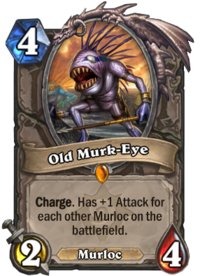 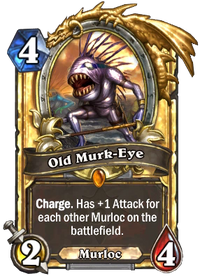 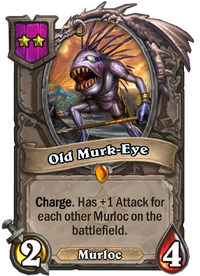 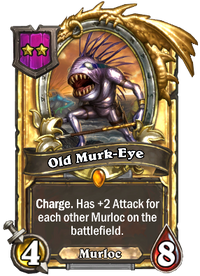 Charge. Has +1 Attack for each other Murloc on the battlefield.

He's a legend among murlocs. "Mrghllghghllghg!", they say.

Old Murk-Eye is a legendary neutral minion card, inducted into the Hall of Fame set, formerly from the Reward set.

Old Murk-Eye can be obtained through crafting only.

A 4 mana 2/4 minion, Old Murk-Eye provides Murloc-themed aggro decks a late-game finisher (late by this deck's standards) through utilizing its Charge ability. This card is best played as a game-finishing attack that your opponent was not preparing for. This is the only powerful Murloc card with Charge.

Old Murk-Eye is a murloc leader who terrorises the coast of Westfall. He coerced the weaker minded murlocs to raid the Westfall Lighthouse with him, claiming the area for the murlocs.

Old Murk-Eye is a level 20 named murloc that patrols the shore of Westfall, near the old Westfall Lighthouse. Captain Grayson wants Murk-Eye killed. Murk-Eye is slightly stronger than his murloc lackeys around him.

If Old Murk-Eye is played during the Giantfin encounter, Giantfin responds "Middlefin, what are you doing here?" This suggests familiarity, possibly even a familial relationship between the two; note the scale of Tinyfin, Middlefin, Giantfin and Megafin. As Giantfin himself is original to Hearthstone, this is clearly a new piece of lore. 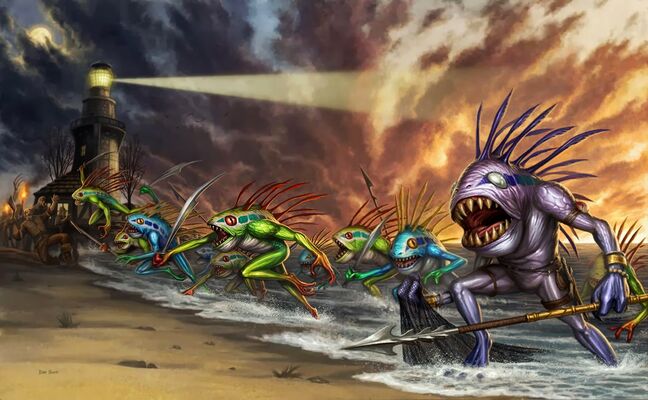