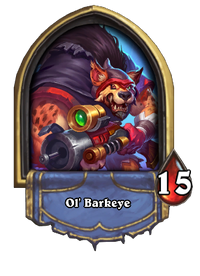 Who gave a high-powered sniper rifle to a gnoll?

For the Tombs of Terror boss, see Ol' Barkeye (boss).

Ol' Barkeye is a hero that the player can pick in The Dalaran Heist. He represents the Hunter class.

Ol' Barkeye has synergy for plenty of treasures or Anomalies; cost reduction effects (alongside treasures like The Muscle and Murgatha) allow him to build up his board quickly in one turn, Elixir of Vigor can allow him to complete The Marsh Queen sooner, Deathrattle duplication and Nesting can double the efficiency of his Deathrattle cards, and Stargazing allows him to either deal 4 additional damage to the enemy hero or gain two Shifting Chameleons for 0 mana to stay prepared. Expedite and Reductive can allow him to play 1-mana minions for free, but their reduced cost makes them invalid to make progress on The Marsh Queen.

Ol' Barkeye is unique to Hearthstone. He is a gnoll who has been given a high-powered sniper rifle by Dr. Boom.