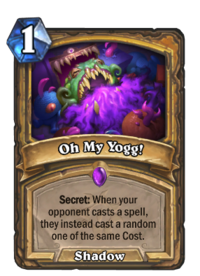 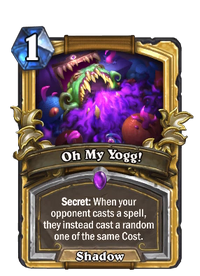 Secret: When your opponent casts a spell, they instead cast a random one of the same Cost.
Flavor text

Many wonders lie within, but they are not mere toys when your mind is their plaything.

Oh My Yogg! is an epic paladin spell card, from the Madness at the Darkmoon Faire set.

Oh My Yogg! functions as a pseudo-Counterspell by disrupting one of your opponent's spells, though the random spell it casts as a replacement can yield varying results. At best, it can force your opponent to cast a spell with a massive drawback (such as Astral Communion or Surrender to Madness), but at worst the replacement spell can have an equivalent or even more powerful effect than the original (such as turning The Coin into Innervate).

This card features most prominently in Wild Odd Paladin, where it's functionally a Counterspell. Slower opponents may need multiple board clears to keep this deck's minions under control, and Oh My Yogg! can replace these spells with ones that are far less impactful. Secret Paladin and other aggressive Paladin decks can also make use of this card in a similar manner.

There is 1 achievement related to Oh My Yogg!.

This is one of the four Old God artifacts, a unique theme of Madness at the Darkmoon Faire. This artifact's effect resembles Yogg-Saron, Hope's End's.