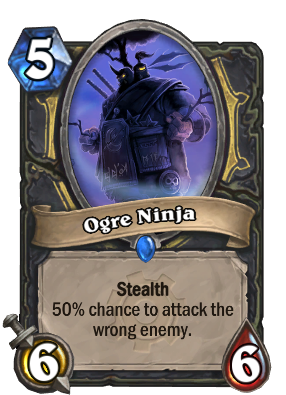 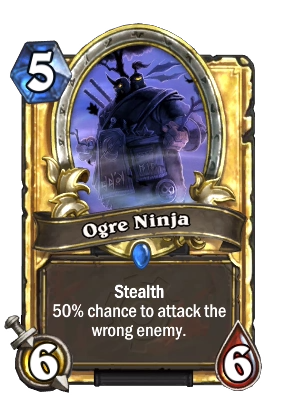 He didn't have the grades to get into ninja school, but his dad pulled some strings.

Ogre Ninja is a rare rogue minion card, from the Goblins vs Gnomes set.

Ogre Ninja can be obtained through Goblins vs Gnomes card packs, or through crafting.

With only the enemy hero as a hostile target, the minion has a 100% chance to hit them, effectively negating its triggered effect.[2]

Most Stealth cards offer two advantages: safe targets for Attack buffs, and the chance to survive regardless of the opponent's minions/weapons and assassinate high-Health enemies. Ogre Ninja is not reliable for either purpose. It trades Stranglethorn Tiger's dependability for +1/+1 and the odd benefit of forgetful. This is especially useful against Gazlowe, who may be backed up by Finicky Cloakfield or Emergency Coolant, both of which Ogre Ninja "counters".

This can be useful for removing protected minions, or even for dealing lethal damage to the opponent themselves. For example, with only 1 Taunt minion on the field, attacking the Taunt using the Ninja will have a 50% chance of bypassing the Taunt and striking the enemy hero. In close games this chance at extra damage can allow players to close the gap.

Because of this possibility, when seeking to prevent an opponent with card such as Ogre Ninja from hitting your hero while behind a taunt, it is effective to summon as many minions onto the field as possible. Each acts to decrease the likelihood of an attack reaching your hero should the minion miss its intended target.

Effect triggering
No! That one.

Ninja is an unusual class for an ogre, but a few notable ninja ogres have been known to exist. This card's art depicts Dagg'um Ty'gor, an ogre ninja originating in the Trading Card Game and Miniatures Game. As with the Ogre Ninja in Hearthstone, Dagg'um is known for combining surprising stealth with a not so surprising lack of intelligence.

"From day one, when we were making this game, Eric Dodds, the game director, proposed again and again and again, 'Ogre Ninja has to be in this game. At some point, in some way, shape or form, Ogre Ninja will show up, I don't care how.' Brode would try to remove it and put it over to this side and [Dodds] would be like, 'What are you doing? Put it back, let's try and figure this out... We can't just put it under the carpet, that piece of art is going in.'" - Ben Thompson[3]