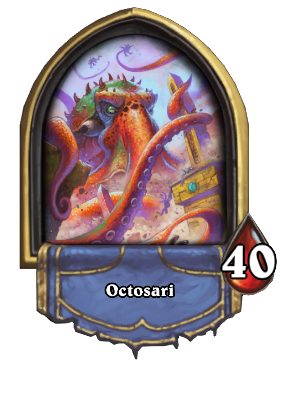 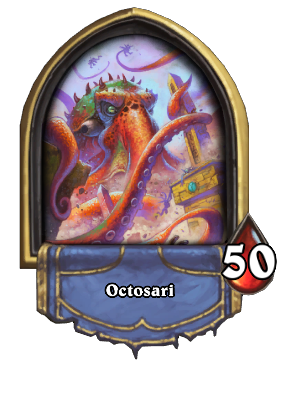 His favorite number is 7. Disrupt its perfection at your own peril!

Octosari is a boss that can be encountered in Chapter 1 of Tombs of Terror. After completing Chapter 1, this boss encounter will be available in any completed chapter.

The key to Octosari's fight is to take advantage of its Hero Power when possible, and to play around it when the board is in your favor. On Normal difficulty, Octosari plays a Token Druid deck, making its Hero Power more detrimental to it than to you. The chapter's Twist works in your favor here, as the Murlocs summoned can often trigger Octosari's Hero Power, clearing the board with no input on your behalf. However, Octosari's tendency to destroy its own minions en masse also allow it to play heavily discounted Mulchmunchers and Volcanic Lumberers, so have an answer ready for those. Keep your hand as full as possible and avoid playing too many minions, as Octosari will easily run out of steam, letting you deal the finishing blow at your leisure.

Octosari's Heroic deck, on the other hand, focuses on having a few large minions in play that can deal heavy damage if left unchecked, and is much less likely to fill the board up for easy clears (barring reckless use of BEEEES!!! on low-health minions). Even then, clears can be undone by its Revenge of the Wild. In this fight, its Hero Power acts as a check to minion-spamming, so avoid over-committing to the board. You'll want to play more aggressively to clear its minions by trading as much as possible and avoid giving Octosari big resurrections with Revenge of the Wild; as its Heroic deck lacks card draw, endurance will still prove its worth.

Sir Finley
How do you stay hydrated out here?

Octosari is unique to Hearthstone.