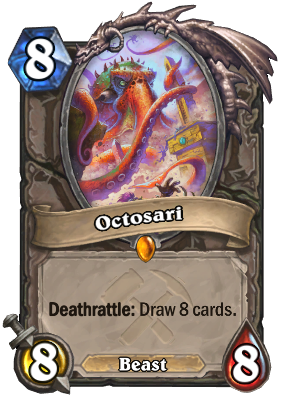 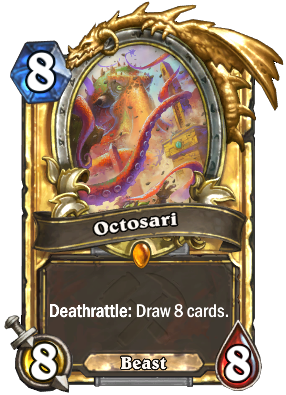 For the boss of the same name, see Octosari (boss).

Octosari is a legendary neutral minion card, from the Saviors of Uldum set.

Octosari can be obtained through Saviors of Uldum card packs, or through crafting.

Octosari provides ridiculous card draw, to the point where it's overkill. It is best played when you are nearly or completely out of cards to avoid overdrawing, but the card is slow and the effect is delayed, making it difficult to play. Also be aware that drawing that many cards means you will be that much closer to Fatigue.

In emergency situations, Octosari could save you from taking damage from Bombs or Corrupted Blood by overdrawing and burning them.

In Wild, Warlocks can give it to the opponent via Treachery then kill it off to have them overdraw instead, with the combination of cost-reducing cards. You can play Power Overwhelming on it before giving it away to set it up for an easy death.

Be especially careful around Baron Rivendare and Necromechanic, which will make Octosari draw a whopping 16 cards, which can be devastating for anyone who has to suffer from it.

Octosari is unique to Hearthstone.