This article is using {{Card template}}.
See Help:Style guide/Card for how to edit this kind of article.
Edit this article
Obsidian Statue
42598 • ICC_214
Regular 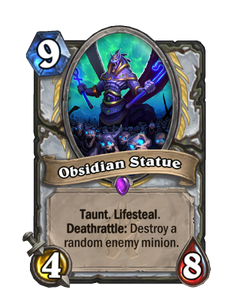 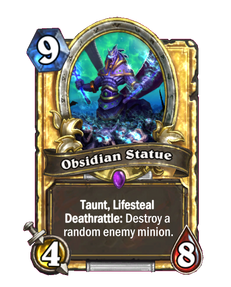 The original artist spent many hours with a fine chisel perfecting the facial expression for maximum tauntiness. 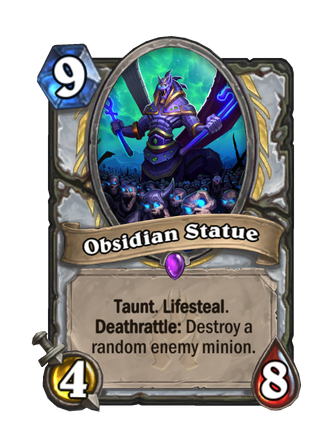 Obsidian Statue is an epic priest minion card, from the Knights of the Frozen Throne set.

Obsidian Statue's powerful combination of Taunt, Lifesteal and a very potent Deathrattle makes it an incredibly difficult minion for your opponent to deal with. Its Taunt effect makes it very likely to activate its Lifesteal and Deathrattle and its high health makes it great for trading down into lower cost minions.

Divine Spirit makes it even more durable, and using

Inner Fire on it makes it an 8/8, which can get immense Lifesteal value in the late-game.

Cards that resurrect such as

Onyx Bishop are very effective on Obsidian Statue, especially in combination with cards that cheat it out earlier like

The entities known as obsidian destroyers are actually enslaved titan constructs that were once called the tol'vir. The tol'vir were created to maintain titan lore repositories and titan machinery surrounding the titan cities of Ulduar and Uldum. Not long after the troll empires divided the insectoid kingdom of the aqir, the aqir that travelled north discovered and overthrew the tol'vir society in Northrend. These aqir would eventually become the race we know as the nerubians today, having adapted the tol'vir's architecture for their own purposes. Similarly, the aqir that travelled south ransacked and overthrew a titan research station near Uldum, renaming themselves the qiraji and calling their new home Ahn'Qiraj.

The Scourge eventually consumed the nerubian empire and threw its few remaining tol'vir slaves into the front lines. Now known as obsidian statues, the tol'vir were often used as figureheads at the forefront of many undead armies after the Third War, inspiring awe and fear in the enemy ranks. Obsidian statues, however, were also able to break free of the obsidian stone that held them and fly into battle, swallowing magic to feed their insatiable hunger as they moved between battles and rained destruction down upon their foes.