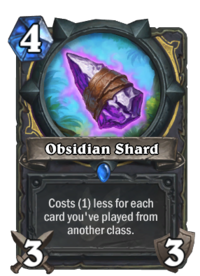 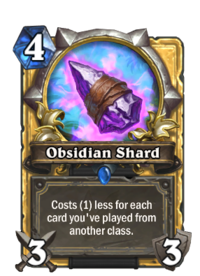 Costs (1) less for each card you've played from another class.

You know you’re a Rogue when a sharp rock makes you go “Ooh! Dagger!”

Obsidian Shard is a rare rogue weapon card, from the Journey to Un'Goro set.

Obsidian Shard can be obtained through Journey to Un'Goro card packs, or through crafting.

Obsidian Shard is generally meant for decks that utilize cards that add copies of class cards from the opponent's class to your hand (Burgle, Shaku, the Collector, Hallucination, Nefarian, Undercity Huckster, and Swashburglar). The stolen cards, when played, reduce the cost of Obsidian Shard and the extra mana allows for card flexibility. The best times to use Obsidian Shard are when there are removable minions on board, or to deal chip damage to the enemy hero. Cards that synergize best with Obsidian Shard are those that buff it or that do something based on its cost, like Southsea Squidface, Bloodsail Raider, and Dread Corsair.