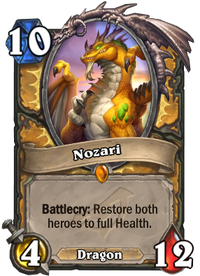 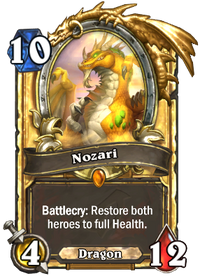 In another timeline, she was called Yeszari.

For the boss of the same name, see Nozari (boss).

Nozari is a legendary paladin minion card, from the Rise of Shadows set.

Nozari can be obtained through Rise of Shadows card packs, or through crafting.

Nozari has similar applications to Tree of Life from Goblins vs. Gnomes. In control decks that are not pushing for damage until the late game, Nozari resets any damage you've taken while stalling, which works in favor against aggro or midrange decks that have expended most of their resources just before being able to finish the game, on top of adding a large 4/12 body. Healing the opponent is less of an issue unless the opponent is at a health disadvantage.

Particularly effective with High Priest Thekal, who can optimize the amount of healing received and if obtained by a Prismatic Lens, you can almost endure the game without suffering any damage.

Nozari can be combined with Blackguard for an insta kill damage against any minion.

You can combine her with a high cost minions deck and summon it via Commencement.

Dragon Consort can be used before Nozari for a 3 turns early summoning. This effect can be further exploited if obtained by Prismatic Lens, reducing her cost even more.

Nozari is a dragon of the bronze dragonflight. She can be found in both adult and child elven forms, at the same time, in the Caverns of Time in Tanaris.

She is the sister of Andormu, whom she stands next to (in both forms) and also co-leader of Keepers of Time.

Notably, Hearthstone is the first time Nozari has been depicted in her dragon form, as she is only seen in high elf form in World of Warcraft.