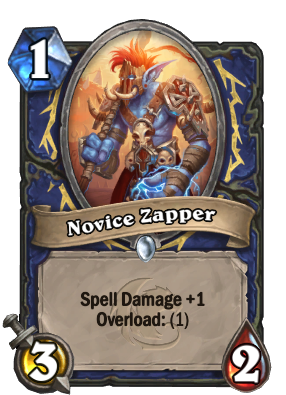 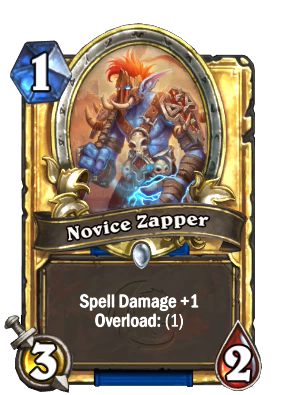 The novices would prefer that he did not.

Novice Zapper is a common shaman minion card, from the Core set.

Two copies of regular Novice Zapper are obtained for raising shaman to level 2.

Two copies of golden Novice Zapper are obtained for winning 50 games as shaman.

Novice Zapper is uncraftable and cannot be crafted or disenchanted.

This minion is similar to Flame Imp, being a very strong class-specific 1-drop with a slight downside in exchange for strong stats. The 3-attack makes this a great minion for aggro decks and the 2-health means it is resistant to being removed by Hero Powers. Novice Zapper is also currently the Shaman class' cheapest form of getting Spell Damage, letting it power up spells like Chain Lightning or Serpentshrine Portal along with a cheap threatening body.

The Novice Zapper appears to be a depiction of Zekhan, the novice Darkspear troll shaman who becomes a confidant of Overlord Saurfang during the events of the Fourth War. The name of the card is reference to the "Zappy Boi" memes that were used to refer to Zekhan prior to his name being revealed, referencing the powerful lightning attacks he used during the World of Warcraft: Battle for Azeroth cinematic trailer.