This article is using {{Card template}}.
See Help:Style guide/Card for how to edit this kind of article.
Edit this article
Novice Engineer
284 • EX1_015
Regular 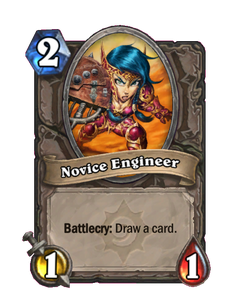 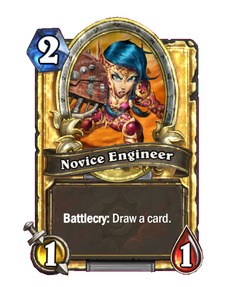 "Half of this class will not graduate… since they'll have been turned to chickens." - Tinkmaster Overspark, teaching Gizmos 101. 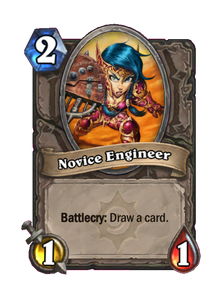 Novice Engineer is a neutral minion card, inducted into the Legacy set, formerly from the Basic set. Its battlecry causes the player to draw an extra card. 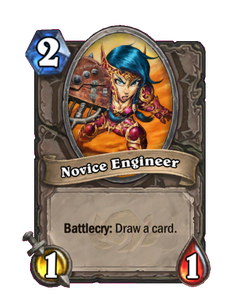 Regular and golden Novice Engineer are uncraftable and cannot be crafted or disenchanted.

Novice Engineer has poor stats for its cost, thus it is usually played for its Battlecry, which allows the controlling player to immediately draw a card. This card's card draw effect can be useful in combination with cards like Questing Adventurer or Edwin VanCleef. This card's Battlecry also makes it a good target for use with return effects such as Shadowstep, allowing the player to draw a second card.

Attack
Oh, if you're sure?

Gnomes are a race known for their ingenuity and engineering inventions.

Gnomes tend to design fairly complicated devices that are relatively safe. Gnomes are in many ways commensurate organizers: a gnome can spend as much time (or more) organizing and planning a project as they do actually working on it. If the design fails, they try to learn why, and fix it if they can. If they meet with success, they will continue to tinker with it and improve the design, often for years afterward. Thus, many gnomish designs feature a high degree of complexity and a low chance of failure, the exceptions being those that dabble with chaos energy — but even then, they take steps to ensure the worst that could happen is a brief, non-fatal failure.

Gnomes overplan new projects, producing blueprints and schematics that can take longer to make than the device itself. While this cautious attitude results in higher quality products and a greater success rate, it often takes so long that cost overruns creep in. While a goblin would scream and flee at the mere thought of a cost overrun, a gnome simply shrugs and presses on. If a project fails to work correctly the first time, a gnome will continue to tinker with it, while a goblin would usually give up and move to something else. Thus, gnomish items have very low failure rates compared to goblin items.