This article is using {{Card template}}.
See Help:Style guide/Card for how to edit this kind of article.
Edit this article
Nourish
95 • EX1_164
Regular 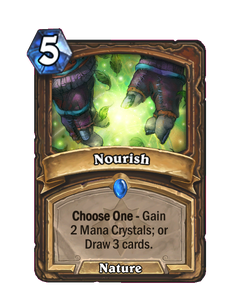 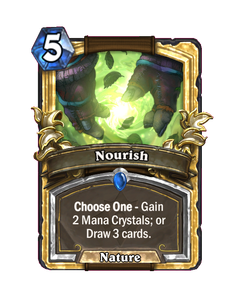 Druids take nourishment from many things: the power of nature, the songbird's chirp, a chocolate cake. 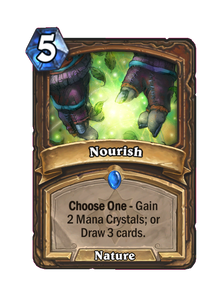 Nourish is a rare druid spell card, inducted into the Legacy set, formerly from the Classic set. 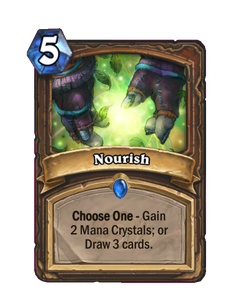 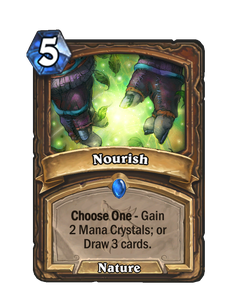 Two copies of regular Nourish are obtained for raising druid to level 6.

Two copies of golden Nourish (Core) are obtained for winning 100 games as druid.

Nourish (Core) is uncraftable and cannot be crafted or disenchanted. 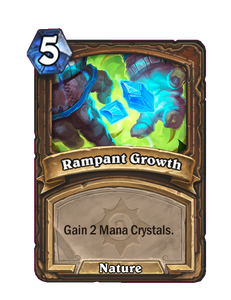 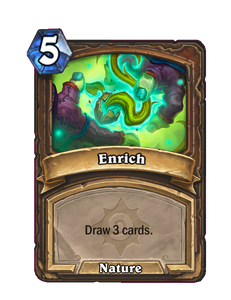 This is a Choose One card which provides the player with two options: to permanently gain 2 Mana Crystals, or to draw 3 cards.

This option grants the druid 2 additional mana crystals. These mana crystals are permanent, and are full when they are granted. This means that choosing this option in effect costs only 3 mana, although it still requires 5 mana to play.

Many people never choose the "gain 2 mana crystals" option because it costs 5 mana crystals. However, the advantage gained in earlier rounds by advancing your mana progression is substantial. In control vs control matchups, the mana gain can be a substantial boon, allowing the player to play huge threats or make efficient turns without the fear of falling behind tempo. Thanks to the addition of powerful high-cost draw and defensive catch-up cards like Branching Paths, Spreading Plague, and Ultimate Infestation, it's fairly easy to recover after playing Nourish for mana.

Used in combination with Innervate and Wild Growth, choosing this option can allow the druid to very quickly expand their mana pool, albeit it at the cost of other action. This will likely leave you taking damage and relying on quickly drawing something useful in order to make up for lost time and board control. Building a deck around such an unlikely amount of cards early in the game is not recommended: Astral Communion achieves much the same result.

This option is much simpler: draw 3 cards. This is a powerful card draw effect, and can be very useful at any stage of the game.

"Time for the harvest."
—Dorn the Tranquil

Nourish is a Restoration druid direct healing ability from World of Warcraft that has synergy with several other druid healing effects.