This article is using {{Card template}}.
See Help:Style guide/Card for how to edit this kind of article.
Edit this article
Northshire Cleric
1650 • CS2_235
Regular 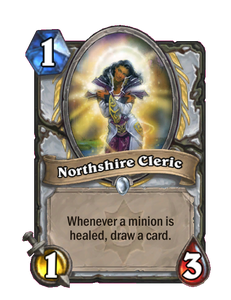 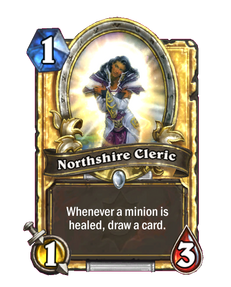 They help the downtrodden and distressed. Also they sell cookies. 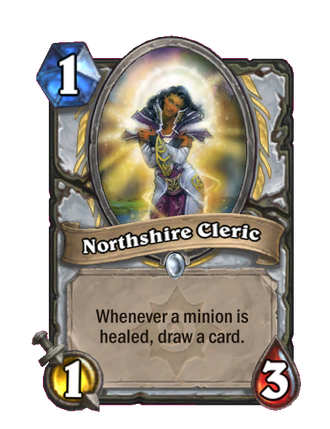 Northshire Cleric is a common priest minion card, inducted into the Legacy set, formerly from Hall of Fame and Basic sets. 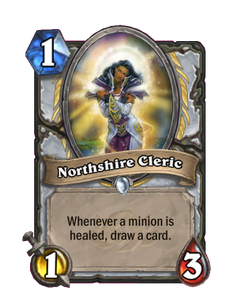 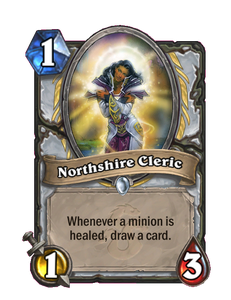 Northshire Cleric's ability provides a constant flow of cards from healing injured minions. A card will be drawn for each minion healed, providing synergy with cards that heal multiple targets like

Holy Nova. Playing two Northshire Clerics will cause the effect to stack, drawing two cards for each minion healed.

Note that the Cleric triggers from any minion being healed. This allows the player to draw a card when their opponent heals their own minions, and from effects like

Circle of Healing that heal all minions. In some situations, such as during a card-starved late-game, a priest with a Cleric out may even choose to use

Lesser Heal to heal an enemy minion, in order to draw an extra card.

Circle of Healing is a more extreme option, potentially providing massive card draw in exchange for healing all of the opponent's minions as well as the priest's. While the healing of enemy minions is definitely a downside, when their damage is minimal the increased card draw can make this play very effective. If both players have a Cleric (or two) out, each Cleric will draw a card for its owner each time any minion is healed, which can make healing a double-edged sword for either player.

When playing against a Cleric, it is generally a good idea to remove it as quickly as possible, especially since priests are capable of buffing them with spells like

Power Word: Shield, and will be quite happy to heal them as often as necessary. Moreover, it is inadvisable to damage enemy minions without destroying them when an enemy Cleric is on the board. However, unless they have an AoE healing spell, the priest can generally only heal one target each turn. When playing a Cleric, expect the opponent to make its removal a priority.

The Cleric is a decent card to play on the first turn, although the effectiveness of this play varies. If the opponent is able to immediately destroy the Cleric with cards such as

Frostbolt, the priest will be denied a valuable source of card draw, which is why priests may choose to wait until they have a way to buff or protect the Cleric before playing it. If the opponent plays a minion, the consequences depend heavily on its stats. If it has less than 3 Attack, the Cleric can be used to attack it, then be healed with Lesser Heal, providing useful card draw and a point of damage to the enemy minion for turn 2; this can generally be considered a decent play, especially if the priest lacks ways to develop the board. However, if the enemy minion has 3 Attack or higher, the Cleric will have been wasted, since it will likely be removed the next turn unless the priest can use their own removal such as

Holy Smite to prevent this from occurring. Under ideal circumstances, the Cleric can be used to remove or injure a number of weaker minions while being healed each turn, providing a steady stream of additional card draw.

In most cases, it is recommended to play the Cleric immediately before a target is to be healed. Since its Attack is minimal, the value of the Cleric usually lies almost solely in its triggered effect, and by playing it early there is a substantial risk of it being removed by the enemy, especially as they will likely assume a healing-synergy play to be coming next turn.

Under the right circumstances, the Northshire Cleric's ability can become a liability. If the player already has 10 cards in their hand, drawing another card will cause that card to be destroyed, or if the deck has been exhausted, will deal cumulative Fatigue damage. When the player's hand is full, the Cleric will therefore destroy one card, or deal a round of Fatigue damage, for each minion healed. Under the right conditions, this can be used by the opponent to great advantage, such as by repeatedly damaging and healing minions in order to trigger the effect. This type of play is primarily possible for priests due to

With this intention in mind, larger-scale healing options such as

Circle of Healing can be employed to cause substantial overdraw. If the opponent has a Cleric on the board, and has near the maximum number of cards in their hand, it may be advantageous to force overdraw; if the opponent has already exhausted their deck, it is always advantageous to do so. Bear in mind that forcing mid-game overdraw entails restocking the opponent's hand before the maximum is reached, providing a serious downside to the play. However, burning cards not only serves to destroy potentially useful options, but also pushes the opponent further toward fatigue, increasing the player's chances of victory if the late-game is reached. In addition, the destroyed cards will be revealed, providing strategic insight into the opponent's deck (card-copying effects aside).

Because of these risks, high level players often advise against going "full Northshire" and playing more than one Northshire Cleric at the same time. The reason is the potential for any healing to cause card draw to spiral out of control, leading to overdraw. However, under the right circumstances, a limited amount of healing can make 2 Clerics extremely effective - just be careful that the opponent does not have the means to force overdraw. This play is especially risky when playing against another priest, for obvious reasons.

Clerics can be found all over Azeroth, their spiritual leadership keeps both the people and the troops of Azeroth focused upon their mission of everlasting peace. Clerics ability to channel the spirit of humanity through their bodies makes them truly wondrous, and stories of their ability to heal the sick and injured, as well as being able to affect the perceptions of others, are miraculous in nature. The transgressions against humanity by the orcs have forced them to devise ways to defend themselves, but their true path remains the healing of men's souls.

The Brotherhood of Northshire is a clerical order, comprised of clerics, priests and paladins based in Northshire Abbey.