This article is using {{Card template}}.
See Help:Style guide/Card for how to edit this kind of article.
Edit this article
North Sea Kraken
2520 • AT_103
Regular 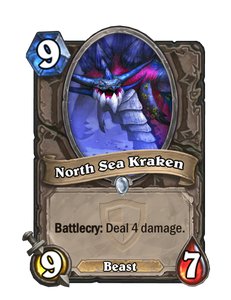 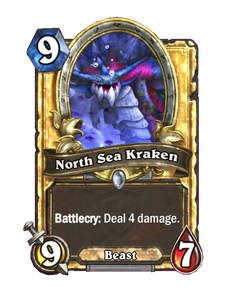 You have no idea how tired this guy is of being released. 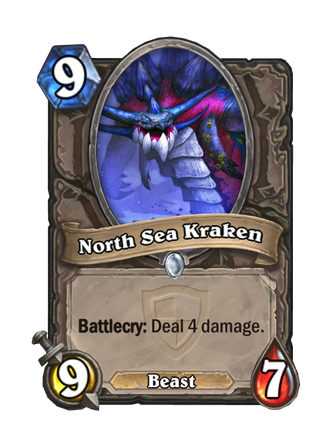 Essentially a scaled-up version of

Fire Elemental, this card serves to deal some extra damage in the late game. Its high Attack leaves it vulnerable to

Fireblast. Therefore, its value usually relies on its Battlecry being used effectively, similar to other expensive minions with powerful text effects like

However, the high attack makes it a powerful threat if it can be Stealthed, e.g. by a

The North Sea Kraken is a neutral level 82 elite kraken attacking both The Firehawk and The Wavecrest near the middle of the Sea Reaver's Run, south of Hrothgar's Landing.

Kraken, or krakken, are two different types of sea monsters. The first type are giant squid-like creatures with tentacles. The second type are more fish-like with giant fins and smaller in size. The second type of kraken are more fish-like, with armored hides, giant fins, large mouths, dorsal spikes, and a horizontal tail reminiscent of whale flukes. They have scales, but do not appear to have visible gills. Little lore has been given about them.

Kolorath is a hostile level 85 elite kraken swimming in a circle around the entire border of the Abyssal Depths. He can be kited, however his melee swings hit for well over 800k damage and drops only a few silver for your efforts.