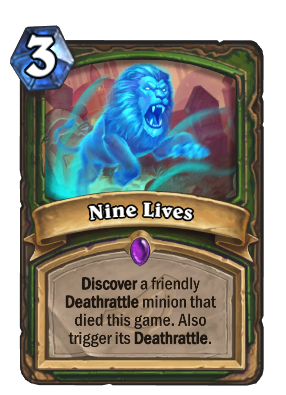 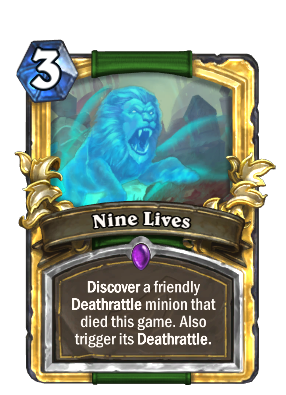 Beware the night of the living pets!

Nine Lives is an epic hunter spell card, from the Rise of Shadows set.

Nine Lives can be obtained through Rise of Shadows card packs, or through crafting.

Nine Lives may not seem like it provides much value for its hefty 3 Mana cost, but depending on the minion selected, it can be devastating. Generally speaking, the best minions to choose are those with massive Deathrattles, such as Oblivitron or Mechanical Whelp; these choices will not only add these minions back to your hand, but also provide sizeable board presence, all for a measly 3 Mana.

Deathwing, Dragonlord's Deathrattle also summons itself out of your hand, allowing you to put a massive 12/12 on board for just 3 mana.

Note that if Mecha'thun is chosen, even if Nine Lives was the last card in your hand, deck and field, its effect will unfortunately not activate as you'll still have one card in your hand after all is said and done (Mecha'thun).