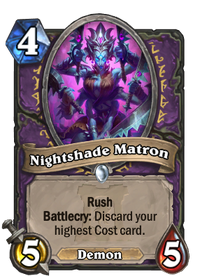 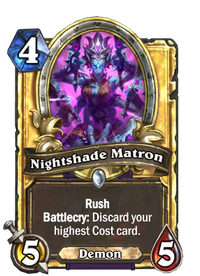 Throws shade at those "high-cost" minions.

Nightshade Matron is a common warlock minion card, from the Ashes of Outland set.

Nightshade Matron can be obtained through Ashes of Outland card packs, through crafting, or as an Arena reward.

This minion has great stats and even comes with Rush, at the cost of discarding your highest cost card. This can sometimes arguably be worse than discarding a random card, as playing this card means you lose out on a big high-cost power play for the late game like Twisting Nether or Zzeraku the Warped instead of something cheaper and less relevant. For this reason, this card should not usually be drafted in a control deck, and should be in an aggro deck that can afford to lose some of its lower costing cards. However, as a pseudo-targeted discard effect, Nightshade Matron is a potential activator to some combos that would otherwise rely on RNG, such as those focused on Cruel Dinomancer resummoning itself or Soulwarden returning itself to your hand, allowing you to infinitely duplicate any other card you've discarded.

This card has fantastic synergy with Hand of Gul'dan, which can be target discarded to avoid paying its 6-mana cost.

Nightshade Matron is a shivarra.