This article is using {{Card template}}.
See Help:Style guide/Card for how to edit this kind of article.
Edit this article
Nightmare
217 • DREAM_05
Regular 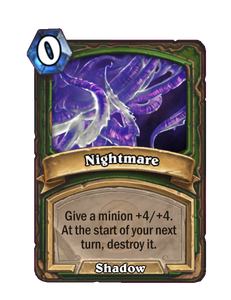 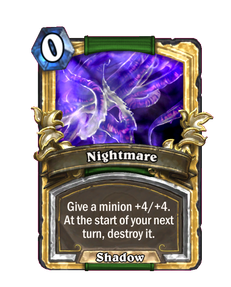 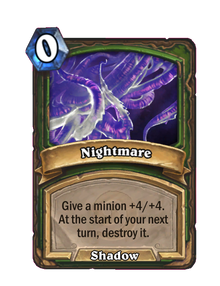 Nightmare is an uncollectible spell card, generated by Ysera's triggered effect and Ysera the Dreamer's Battlecry. 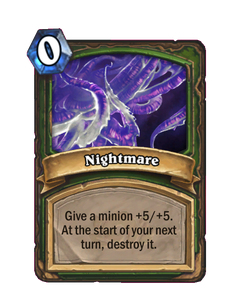 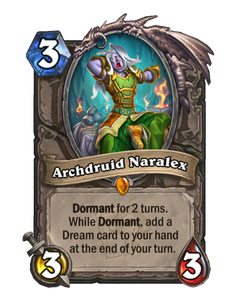 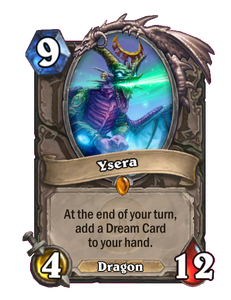 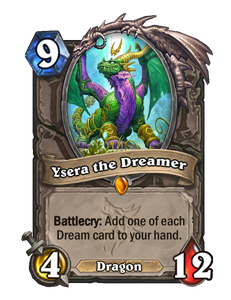 As a tendril from the Emerald Nightmare, this card depicts the influence of Yogg-Saron.

The Emerald Nightmare (or the Nightmare for short) is a mobile area of corruption within the Emerald Dream.

During the War against the Nightmare, it was revealed that the Emerald Nightmare was under the rule of a figure known as the Nightmare Lord, who in fact was really Malfurion Stormrage's old nemesis Xavius. However, it was also revealed that Xavius himself was a minion of a powerful yet ancient evil, residing in the Rift of Aln, and possibly also beneath Azeroth's oceans.

The origins of the Nightmare stretch back to 4,500 years before the First War. Fandral Staghelm took branches from Nordrassil, the World Tree, and planted them over saronite that had begun to appear across the world, including a particularly large source of saronite in the Grizzly Hills. Unfortunately, its roots went deep enough that they touched the prison of the Old God Yogg-Saron, corrupting the tree and spreading madness throughout the nearby wildlife. The druids sorrowfully destroyed the world tree, believing that this act would halt Yogg-Saron's corruption. What they did not know, however, was that Yogg-Saron had used the world tree to spread his corruption into the Emerald Dream itself.