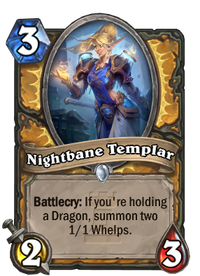 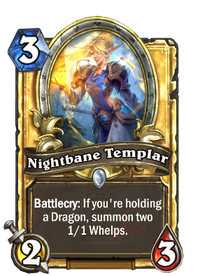 Originally joined to be Arcanagos’ Templar, but has to admit that ordering pizza has become waaaay easier.

Nightbane Templar is a common paladin minion card, from the One Night in Karazhan set.

Two copies of regular Nightbane Templar are obtained by defeating Nightbane, the second boss in One Night in Karazhan's third wing, The Menagerie.

As a Wild format card, both regular and golden versions of Nightbane Templar can also be crafted for the following amounts: 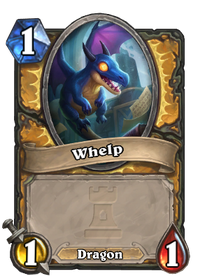 An advanced Razorfen Hunter that can summon two Dragons instead of one Beast, with the drawback that it requires the player to be holding a Dragon in order to spawn them. With a total 4/5 in stats, the flexible targeting of Whelps, and its resistance to both cheap single-target and AoE removal, Templar excels at taking early control of the board. Its best activator is Hungry Dragon since you can play it the following turn and dispatch whatever it summons. Alternatively, follow up with Keeper of Uldaman to buff a Whelp, or to debuff a large minion so Templar and a Whelp can subdue it.

Nightbane Templar counts as 3 for Righteous Cause and her summoning effect can be followed by Avenge or Dark Conviction.

Sword of Justice transform this card into a serious threat for your opponent.

This card can be used as a bait for Dinosize. A late game 1/1 card will probably be ignored, and this card gives three options for it.

Summon
Face the heirs of magic!

Judging by her quotes, the templar is either a dragon in elven form, or an elf with strong ties to the Blue Dragonflight.