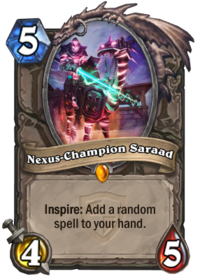 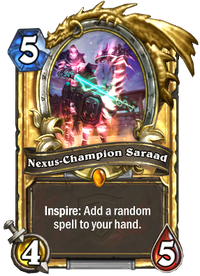 Inspire: Add a random spell to your hand.
Flavor text

The ethereals have their own jousting tournament, and Saraad is the reigning champion. Also he won the ethereal hot dog eating contest.

Nexus-Champion Saraad is a legendary neutral minion card, from the Grand Tournament set.

Nexus-Champion Saraad can be obtained through The Grand Tournament card packs, or through crafting.

Strong with Inspire-synergy cards such as Maiden of the Lake and Fencing Coach. An interesting option for Raza Priest.

As of The Grand Tournament, there are 214 collectible spells in the game, giving each spell less than a 0.5% chance of being generated. The average mana cost of a spell is 2.8.

The following tables show probabilities for spells of specific mana costs and classes.

Summon
Let's negotiate. You concede and I'll let you live.

Attack
You had your chance.

Ethereals can be found in Nagrand south of Lake Sunspring, in the Mana Tombs of Auchindoun, the Blade's Edge Mountains, and throughout the Netherstorm. A small number also dwell in Shattrath. The ethereals are driven by trade and economics, and accordingly their political structures are centered around trade princes and political "companies." The ethereal faction called The Consortium, which players can gain reputation with, is one of these. The ethereals that currently control the Mana Tombs in Auchindoun led by Nexus-Prince Shaffar are another of these "political companies." The Ethereum is a radical militant organization that attempts to avenge the destruction of the ethereal homeworld by void creatures. The Protectorate attempts to thwart the void and protect neutral races from the Ethereum's attacks.

The ethereals are similar to goblins, in the way their political systems work, and like the goblins the ethereals will support anyone who would further their profits, and oppose anyone who dares interfere with their plans. The Ethereals also share in the goblins' propensity for technology, though their technology appears to be far more powerful and otherworldly. Ethereals possess everything from the familiar, such as transporters, to the radical, such as their eco-domes. They utilize a unique school of magic known as technomancy.

While most ethereals seem completely neutral, the Consortium later allies with the Sha'tar.