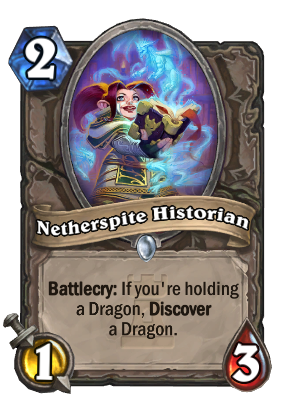 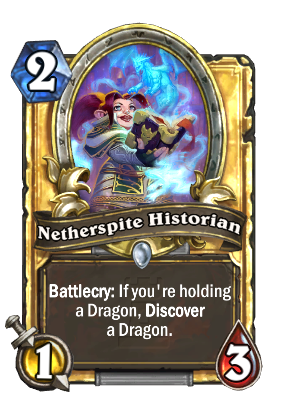 Battlecry: If you're holding a Dragon, Discover a Dragon.
Flavor text

She can tell you all about the history of people not STANDING IN THE GREEN BEAM!

Netherspite Historian is a common neutral minion card, from the One Night in Karazhan set.

Two copies of regular Netherspite Historian are obtained by defeating Netherspite, the second boss in One Night in Karazhan's fourth and final wing, The Spire.

As a Wild format card, both regular and golden versions of Netherspite Historian can also be crafted for the following amounts:

The limited range of collectible Dragons means Netherspite Historian has a good chance of providing at least one high value card for selection, making it extremely card efficient, and particularly powerful in the late game. Synergizes well with copies of Twilight Guardian and Book Wyrm in your hand since they both trigger the Historian's effect, and the Historian's battlecry subsequently provides another Dragon to trigger the aforementioned Dragons.

NB: As a Discover effect only neutral cards and those matching the player's current class will be presented for selection.

This gnome may be an expert on the nether dragon Netherspite, or may be researching him in Karazhan's extensive libraries. She is original to Hearthstone.