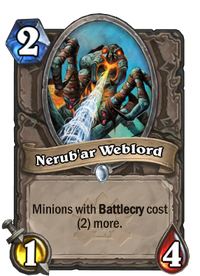 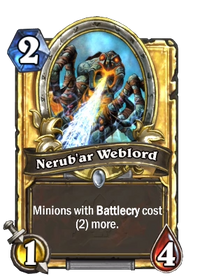 Nerub'ar Weblord is a common neutral minion card, from the Naxxramas set.

As a Wild format card, both regular and golden versions of Nerub'ar Weblord can also be crafted for the following amounts:

This card's ongoing effect can be effective in slowing minion-heavy aggro decks or zoo decks, since many of the minions found in those decks have Battlecries. By increasing their cost, the flow of minions is stymied, at least until the Weblord can be neutralised, a task which its 4 Health makes reasonably difficult.

Additionally, Battlecry minions with an unmodified cost of nine or more are unplayable as long as Weblord stays on the board, possibly preventing your opponent from utilising their heavy hitters.

The Nerub'ar are undead nerubians, known for assaulting the Alliance and Horde fortresses when the factions arrived in Northrend to defeat the Lich King.