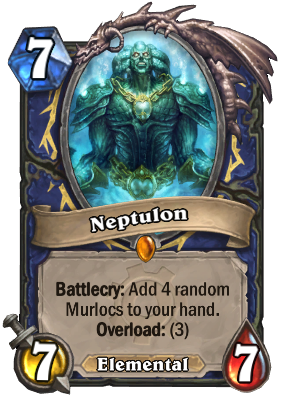 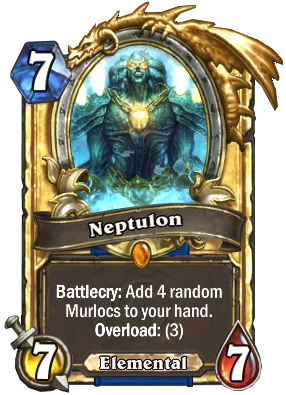 Neptulon is "The Tidehunter". He’s one of the four elemental lords. And he and Ragnaros get together and make really amazing saunas.

Neptulon is a legendary shaman minion card, from the Goblins vs Gnomes set.

Neptulon can be obtained through Goblins vs Gnomes card packs, or through crafting.

A deck already running Murlocs, especially Old Murk-Eye, will benefit most from the pile of Murlocs this card grants. Its effectiveness depends on your ability to survive the Overload turn, during which you will likely be unable to summon all of the generated Murlocs, unless you followed Neptulon with Lava Shock. It can also be effective in non-Murloc control decks as a burst of card advantage.

The chances of getting good Murlocs from Neptulon's Battlecry are higher than most people believe. Think of this card as the Shaman's version of Dr. Boom, that adds Boom Bots into the hand instead of summoning them onto the board.

Neptulon the Tidehunter is one of the four Elemental Lords. He fought against the Titans. He did not ally himself with Deathwing, and his current status is unknown.

The Old Gods' armies were led by the powerful Elemental Lords: Ragnaros the Firelord, Therazane the Stonemother, Al'Akir the Windlord, and Neptulon the Tidehunter, who is the strongest of them all. Their chaotic forces raged across the face of the world and clashed with the colossal Titans. Though the elementals were powerful beyond mortal comprehension, their combined forces could not stop the mighty Titans. One by one, the elemental lords fell, and their forces dispersed.

The Pantheon shattered the Old Gods' citadels and chained the four elemental gods far beneath the surface of the world. Without the Old Gods' power to keep their raging spirits bound to the physical world, the elementals were banished to an abyssal plane, where they would contend with one another for all eternity. With the elementals' departure, nature calmed, and the world settled into a peaceful harmony.

"Neptulon was an interesting card we talked about with the designers early on - mostly about the flavor of Neptulon summoning Murlocs. He doesn't really do that in WoW, but the Murloc type is a cool part of Hearthstone, so the elemental lord of water summoning a host of his water-dwelling minions was a pretty cool concept."[3]