This article is using {{Card template}}.
See Help:Style guide/Card for how to edit this kind of article.
Edit this article
Necrium Blade
48478 • BOT_286
Regular 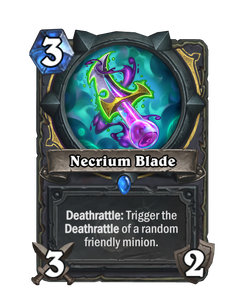 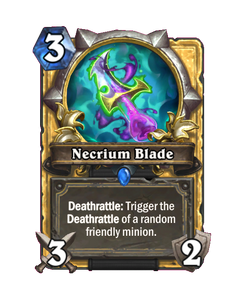 Grab death by the handle. 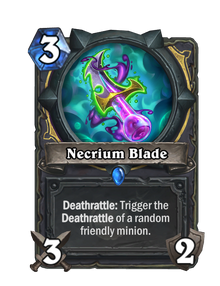 Necrium Blade is a rare rogue weapon card, from The Boomsday Project set.

Necrium Blade is a decently statted weapon with a Deathrattle effect that creates additional use of a minion's Deathrattle effect without requiring killing it first. Its power comes in being able to "store" its effect by waiting for the right moment to break the weapon to activate its effect for no additional mana investment on that turn, letting you play strong Deathrattle minions like Mechanical Whelp on curve.

Paired with Kobold Illusionist and Malygos, Necrium Blade can serve to be part of an OTK, triggering the deathrattle of the illusionist to summon an extra copy of Malygos.

THERE’S NO PROBLEM! Well, there is a small problem. It’s unstable. Terribly, terribly unstable. At the best of times it’s a tricky element that can warp the mind. Hands-on research is the most efficient, but when exposed to the raw element, my assistants age through their entire lives in the blink of an eye—and they aren’t even courteous enough to get up again after they expire. It’s exasperating! Working alone has been slowing my research tremendously.[1]