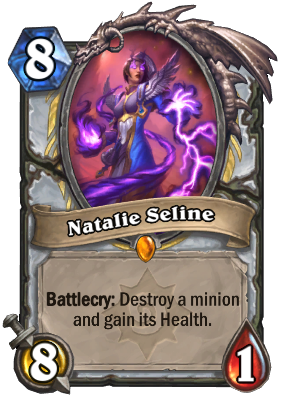 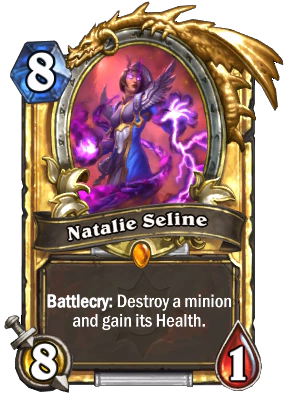 She discovered Xal'atath, Blade of the Black Empire, a terrible weapon of shadow magic that could both swallow a soul and cut a mean julienne.

Natalie Seline is a legendary priest minion card, inducted into the Legacy set, formerly from the Classic set. 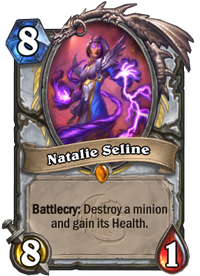 Natalie Seline can be obtained through crafting only.

Natalie Seline (Core) is uncraftable and cannot be crafted or disenchanted.

Natalie Seline is an effective removal tool who is capable of destroying a large enemy minion and putting a sizable threat into play. Destroying a minion with at least 4 health is enough for her to be worth the mana cost, putting an 8/5 on the board while clearing a minion. Anything larger, and Natalie Seline is a very efficient play. Unlike most single-target removal, Natalie is very expensive and will take most of your turn to play. This makes her ideal at dealing with a single large minion over a few medium minions. She can however be played on the same turn as Shadow Word: Pain or Shadow Word: Death with 10 mana, making a significant tempo swing.

Natalie Seline can be useful for control decks as a removal specifically aimed at other control decks. Her restrictive cost makes her poor at dealing with aggro decks, and she may come in too late against some midrange decks.

If you have Natalie, at least 8 mana, and a cheaper form of hard removal in your hand, you should prioritize playing Natalie. Her higher cost makes her harder to flexibly use. Even if it's not the highest-health target on the board, Natalie still provides a decent body and destruction. One exception would be if you know your opponent has an important 4-Attack minion in their deck, since, unlike the Shadow Words, she can destroy 4 Attack minions.

Earth Shock or a Magehunter will instantly destroy Natalie. Earth Shock can be generated by Zephrys the Great on demand if played against her.

Natalie Seline was a bishop from Stormwind that, after the First War, began to delve into workings of the orc necrolytes who had poured through the Dark Portal and desecrated their hallowed dead. While at first this was done in order to provide Azeroth with the knowledge it needed to fight against such dark magic, her studies over the years became increasingly obsessed with finding out why such dark energies existed at all, and why she began to see the ebb and flow of such energies in the world around her. She began preaching about the necessity of balance between dark and light, but after her death, her books were locked away in the Kirin Tor's vaults in Dalaran.