This article is using {{Card template}}.
See Help:Style guide/Card for how to edit this kind of article.
Edit this article
Nat Pagle
1147 • EX1_557
Regular 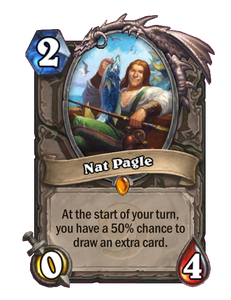 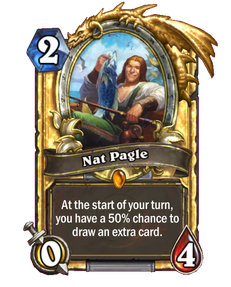 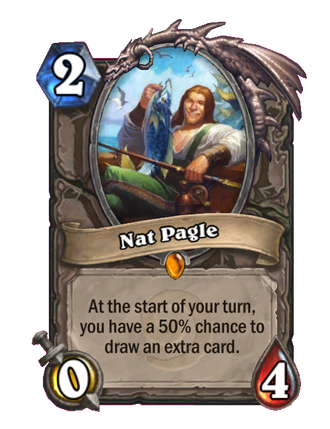 For the minion card from the Whispers of the Old Gods set, see

Nat Pagle is a legendary neutral minion card, inducted into the Legacy set, formerly from the Classic set. 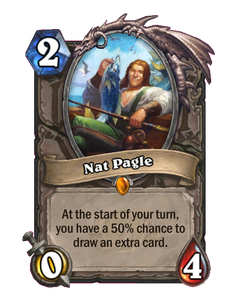 The purpose of Nat Pagle is to gain a draw advantage over your opponent while acting as a wall. He is fairly hard to kill early game (turn 2) and, throughout the game, can give a large advantage to the player who controls him. If used well he can be buffed and will be a great resource all game long. This card also works exceptionally well after being stealthed in a rogue deck.

Because Pagle's triggered effect activates at the start of the controlling player's turn, the opposing player has a single turn in which to try to remove him before there is a chance of an extra card being drawn. If the player can do so, Pagle can be considered to have been of little use, other than to possibly act as bait for the opponent's removal abilities, and to otherwise delay play by both players for a round.

Nat Pagle is a level 45 fishing trainer located at Nat's Landing on an unnamed island in Tidefury Cove, southwest of the Alliance port city Theramore in the contested territory of Dustwallow Marsh. Currently, Nat Pagle is the most famous and well-known fisherman (or "Angler Extreme") in World of Warcraft. Apparently, he used his fame (or got famous) by launching or licensing his own line of fishing equipment.

He states he has no particular interest in fishing, but has been fishing for 20-30 years. He also says that fishing is "a great excuse to drink ... heavily", and therefore he is assumed to be an alcoholic. This assumption is also supported by the fact that there are many booze bottles found at Pagle's Pointe in the Zul'Gurub instance, which is presumably a former fishing spot of his.