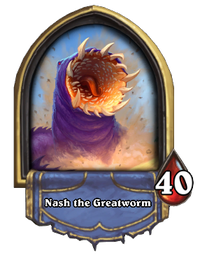 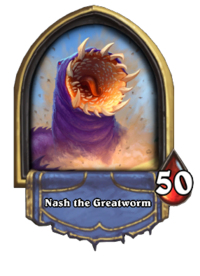 Rumor has it this is merely the other end of Gnosh the Greatworm.

Nash the Greatworm is a boss that can be encountered initially in Chapter 2 of Tombs of Terror. After completing Chapter 2, this boss encounter will be available in any completed chapter.

Nash is unique to Hearthstone. It is extremely similar in appearance to Gnosh the Greatworm. From its flavor text, it is implied that the two are related, but it is not known in what way.