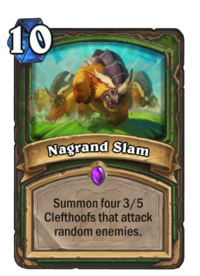 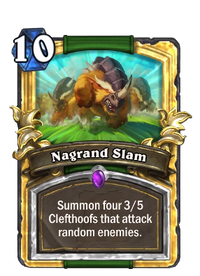 Come on and slam, and welcome to Nagrand!

Nagrand Slam is an epic hunter spell card, from the Ashes of Outland set. 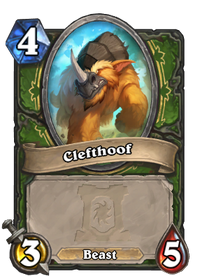 Ideally played when there are no enemy minions on the field, as it gives instant 12 damage to face and four 3/5 bodies on the field at 10 mana. However, it's also good control against any lingering low health minions. This increases damage to 16 face if Call of the Wild, Timber Wolf, or Leokk from any source was played earlier.

Nagrand is a zone in Outland. It is the last uncorrupted area in the world and home to most of Draenor's remaining natural wildlife, such as the clefthooves.

Clefthooves (pl. also clefthoof) are large, hairy, kodo-like beasts native to Draenor. In Outland, they can only be found in Nagrand, but they are still plentiful on the alternate Draenor.

Large enough to quake the ground, covered with a thick valuable pelt, and armed with enormous tusks, these gigantic beasts are a hunter’s most treasured prize and worst nightmare rolled into one. The meat of a single adult clefthoof can feed an orc clan for days, but their inclination to travel in large packs makes them dangerous prey - beware their devastating headbutt or swiping attacks with their formidable tusks. Fortunately, it’s nearly impossible to be surprised by these massive beasts – heroes will be able to see and hear them coming from far away! They are known for violently defending their young.