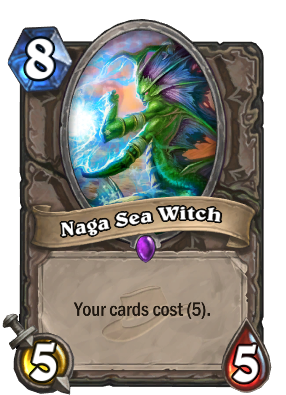 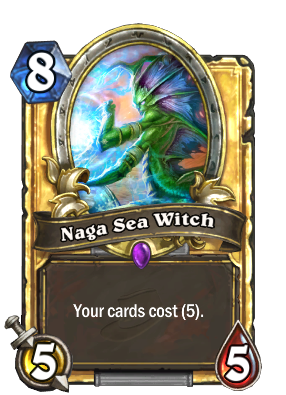 If she had studied harder, she would have been a C+ witch.

Naga Sea Witch is an epic neutral minion card, from the League of Explorers set.

Two copies of regular Naga Sea Witch are obtained by defeating Lady Naz'jar, the third boss in The League of Explorers's third wing, The Ruined City.

As a Wild-format card, both regular and golden versions of Naga Sea Witch can also be crafted for the following amounts:

This card is difficult to use. Ideally you would play it on curve then on the next few turns you would be able to play a card you wouldn't normally be able to due to their high mana cost. However due to this effect until Naga Sea Witch's effect ends (by silence or death) you are limited to playing only 1 card per turn until you have 10 Mana Crystals. Then at that point you are limited to two cards per turn. This can greatly limit your tempo if mishandled (in other words If your hand would normally allow you to play more than one card if not for Naga Sea Witch's effect).

Due to a change (released around the time of Knights of the Frozen Throne in 2017) which seems to cause this card's effect to change the base cost of cards. As such, Naga Sea Witch's effect would be applied before other cost reductions, including the card-text present on the affected cards. A notable effect is causing giants to be much cheaper or mana-free, which for example makes Mountain Giant cost 0 with 5+ cards in hand, Molten Giant to cost 0 from only 25 Health remaining, and so on.

This card saw limited play (and no competitive play) for most of its existence from release until 2017. The effect, while very unique, did not fit any particular archetype. However, the consistency update around Knights of the Frozen Throne gave rise to a new style of deck, limited to Wild format.

The archetype played multiple Giants, typically Mountain Giant, Sea Giant, Molten Giant, and Clockwork Giant, as well as occasionally Arcane Giant. The deck tried to draw a handful of giants, then play Naga Sea Witch on turn 5 and fill the board with 0-cost 8/8 minions. This card package was entirely neutral, but the most consistent build turned out to be Giant Hunter thanks to Stitched Tracker easily searching for Naga Sea Witch and King's Elekk for a powerful generic draw card. A variant of Handlock also used this build effectively.

This eventually led to Blizzard increasing Naga Sea Witch's cost from 5 to 8, killing the competitive viability of this card. Notably, this was the first ever nerf to a Wild-only card.

Summon
I will not be trifled with.
Attack
For the empress.

The serpentine Naga are some of the most formidable villains of Azeroth. Masters of sorcery, the naga were formerly night elves, members of Queen Azshara's court in the War of the Ancients. They were transformed into naga by the Old Gods, and now haunt the seas of Azeroth building a great civilization on the ocean floor.