This article is using {{Card template}}.
See Help:Style guide/Card for how to edit this kind of article.
Edit this article
Naga Corsair
40889 • CFM_651
Regular 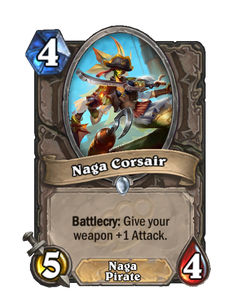 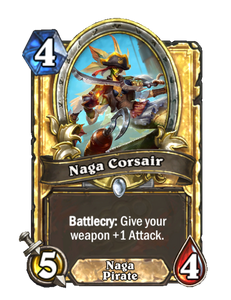 Hook-tails are nice and all but she keeps getting stuck on things. 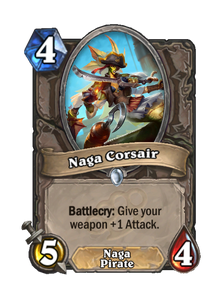 Naga Corsair is a common neutral minion card, from the Mean Streets of Gadgetzan set.

Although the Battlecry effect of giving your weapon +1 Attack is rather underwhelming compared to certain other Pirates, Naga Corsair has a Battlecry and a better statline than Southsea Squidface, requires no Pirate on board like the Bloodsail Cultist, and costs 1 less than Captain Greenskin. This card is a very strong addition to especially warrior decks that combine multiple strong weapons, weapon buff cards, and pirate synergy for an aggressive "hit your face or die trying" strategy.

Naga Corsair is best used when you have a weapon with a high Durability to get the most value out of it. It can also improve the value of cards like Southsea Captain and Bloodsail Cultist.

For rogues, Goblin Auto-Barber is cheaper and has the exact same Battlecry as Naga Corsair.