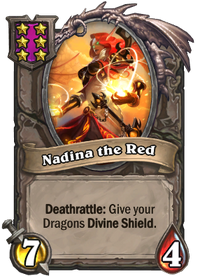 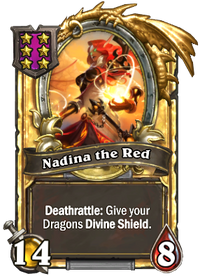 Deathrattle: Give your Dragons Divine Shield.

Nadina the Red is a Tier 6 minion in the Battlegrounds game mode.

Nadina, in combination with Kalecgos, Arcane Aspect, is what gives Dragon warbands their enormous late-game potential. Nadina gives all of your Dragons Divine Shield, typically Dragons that have grown to enormous sizes through Kalecgos, and the combination of massive Dragons with Divine Shield is matched by few other compositions. She also has great synergy with Drakonid Enforcer.

Nadina should be placed as the leftmost minion to provide Divine Shields for the rest of the Dragons. Giving her Taunt with Defender of Argus guarantees that it will trigger its Deathrattle. A second Nadina can be placed on the right or middle side to refresh your Dragons' Divine Shields after they've attacked. Note that a Golden Nadina is generally not worth getting unless you have no space for a second Nadina.

An Unstable Ghoul can be used to counter Nadina, but it needs to be used properly to do so. If you have no other Taunt minions and Nadina attacks first, the Ghoul will die before Nadina does, so your board will need other Taunt minions to try and redirect her attack so she dies before the Ghoul does. If Nadina doesn't have Taunt, you can also stall Nadina with a low-Attack Taunt minion and give your other minions a chance to kill the opponent's Dragons before they gain Divine Shield.