N'Zoth, God of the Deep

This article is using {{Card template}}.
See Help:Style guide/Card for how to edit this kind of article.
Edit this article
N'Zoth, God of the Deep
60443 • DMF_002
Regular 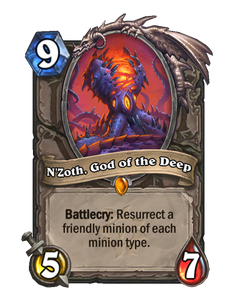 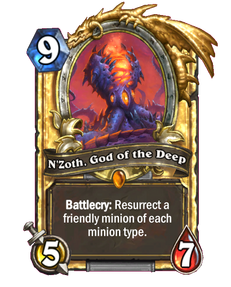 It really just wants to cuddle all the creatures of Azeroth. 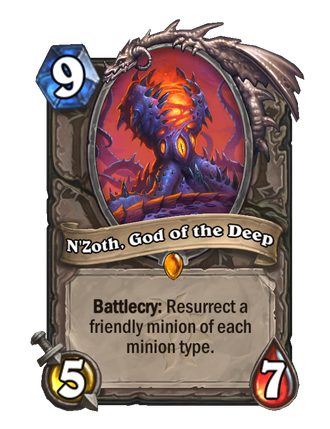 For other representations of N'Zoth, see N'Zoth (disambiguation).

N'Zoth, God of the Deep is a legendary neutral minion card, from the Madness at the Darkmoon Faire set.

N'Zoth, God of the Deep shares the similar resurrection effect to its old predecessor, but this time resurrecting one of each different minion types.

Since "All"-type minions count as any other of the minion types, they easily fulfill towards N'Zoth's criteria for resurrection. As such, a simple way to fill the pool of resurrectable minions is to put

Nightmare Amalgam into play before playing N'Zoth to fill your entire board with ease.

N'Zoth is a solid choice for Menagerie-styled decks that contains multiple minion types and synergies revolving around said minion types. Just like his predecessor, he provides a huge amount of tempo once played, regaining board control. The same criteria do apply, however: As there's a limit to the number of minions that can be resurrected, it is recommended that decks running N'Zoth have a good range of minions with fair-high stats for the best result.

N'Zoth, the Corruptor is the Old God of Madness an Old God who is likely imprisoned beneath Azeroth's oceans, and is responsible for the spark of the Emerald Nightmare corrupting the Emerald Dream. Due to its oceanic nature, it is possible that it is the Old God which turned night elves into naga, corruption of Neltharion into Deathwing and it likely makes several indirect appearances in the quest-chains of the Vashj'ir zone. In ages past, N'Zoth engaged in a long war with

Deathwing and during World of Warcraft: Battle for Azeroth the Old God once again assaulted Azeroth but was ultimately stopped by Magni and the heroes.

This depiction of N'Zoth, along with its hero counterpart, is based on its appearance in the Battle for Azeroth expansion.