This article is using {{Card template}}.
See Help:Style guide/Card for how to edit this kind of article.
Edit this article
Mysterious Challenger
2726 • AT_079
Regular 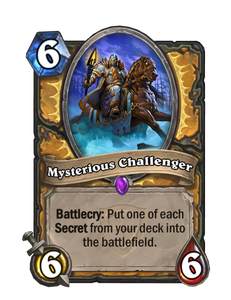 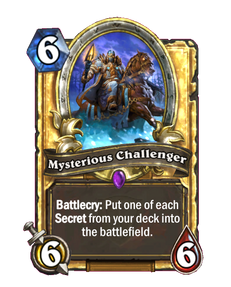 Dimensions: Full • 330 x 410px
Battlecry: Put one of each Secret from your deck into the battlefield.
Flavor text

He may sound surly and antisocial, but he's actually just really shy. 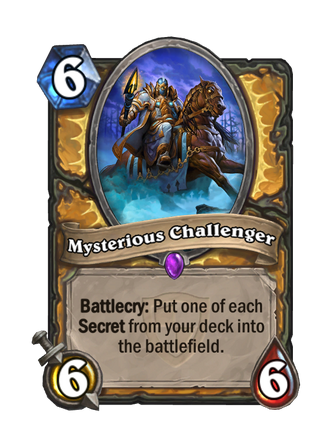 For the event version of this card, see Mysterious Challenger.

Mysterious Challenger is an epic paladin minion card, from the Grand Tournament set.

While Paladin Secrets are individually weak, Mysterious Challenger forces your opponent to play around several of them at once, making it difficult for them to gain or maintain board control. On top of that, by pulling Secrets out of the deck it also reduces your deck size to increase the chance of drawing more valuable cards. The minion itself is also reasonably strong for its mana cost. This card is the centrepiece to the Secret Paladin deck - see that page for details.

This card's value depends on how many Secrets it pulls from your deck when you play it. This card is best used in a deck that has multiple different Secrets in order to maximize its effectiveness.

The introduction of this card gave rise to the Secret Paladin, a deck that quickly rose to dominance in the meta following the release of The Grand Tournament, remaining highly effective until Whispers of the Old Gods and the arrival of game formats, which saw the removal of key cards like

Muster for Battle. However, while not as popular as it once was, as of late 2016 the deck remained viable.[3] The removal of Mysterious Challenger from Standard format in 2017, however, ended the archetype in Standard matches.

With his uniquely non-specific background, Mysterious Challenger appears to be original to Hearthstone - at least as far as we can determine.