This article is using {{Card template}}.
See Help:Style guide/Card for how to edit this kind of article.
Edit this article
Myra Rotspring
48159 • BOT_243
Regular 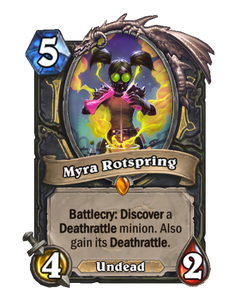 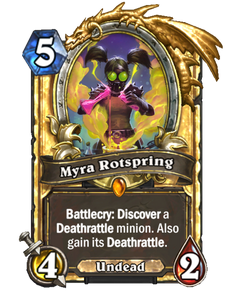 On her first day on the job, Myra removed the smoke detectors. 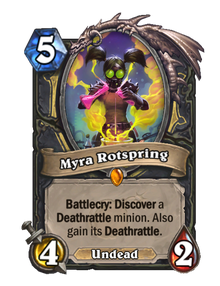 For the boss of the same name, see Myra Rotspring.

Myra Rotspring is a legendary rogue minion card, from The Boomsday Project set.

While Myra has subpar stats for her cost, her true potential lies in her Battlecry. It's important to choose a Deathrattle that is both strong when paired with Myra's initial body, but also a good minion to have in your hand. Decent options include but are far from limited to Khartut Defender for a good on-curve heal, Anub'arak for instant board presence and endless value, or Mechanical Whelp for a huge threat.

Myra can be combined with Necrium Blade and Necrium Vial for further value, both being a target herself and giving you more targets in the future.

Myra is unique to Hearthstone.

Yes, yes. You came from Flark’s shack of a workshop, didn’t you? You reek of explosives. And those abominable peppers.

You’re here for yet another status update, no? No need to explain—it’s obvious. Dr. Boom should come examine my experiments for himself some time. What’s the worst that could happen? I’m dead, and it doesn’t bother me at all.

THERE’S NO PROBLEM! Well, there is a small problem. It’s unstable. Terribly, terribly unstable. At the best of times it’s a tricky element that can warp the mind. Hands-on research is the most efficient, but when exposed to the raw element, my assistants age through their entire lives in the blink of an eye—and they aren’t even courteous enough to get up again after they expire. It’s exasperating! Working alone has been slowing my research tremendously.

Of course! That’s the answer! Keep them alive! Why didn’t I think of that? Tell Boom to send me another assistant as soon as he can.