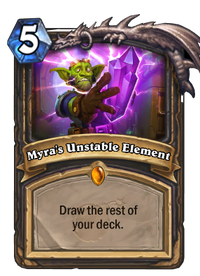 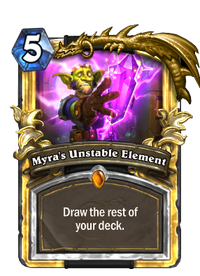 Draw the rest of your deck.

What could go wrong?

Myra's Unstable Element can be obtained through The Boomsday Project card packs, or through crafting.

This card offers extreme value at an extreme price. While the number of cards you draw is unparalleled, it doesn't stop until your entire deck is drawn out, which means you'll instantly go into fatigue and very likely burn a large number of cards. It can be used as a last resort card if you are nearly tapped out and need more cards to keep up pressure or need to topdeck the right answer to secure tempo or gain lethal.

On the other hand, instead of using the card for card draw, it can be used to empty your deck. Once you have an empty deck, you can shuffle in new cards, which now have a much higher chance of being drawn. For example, you can fill your deck with Pogo-Hoppers with Lab Recruiter to constantly summon them and ramp up their stats, summon a bunch of spider with Fal'dorei Strider, or play Academic Espionage to guarantee drawing greatly discounted cards. Be sure to draw the necessary cards first to enable these combos, or at the very least have enough space in your hand to reduce the chances of burning them.

Chef Nomi follows up terrifically after this card, enabling him to be played much earlier than practically possible.

THERE’S NO PROBLEM! Well, there is a small problem. It’s unstable. Terribly, terribly unstable. At the best of times it’s a tricky element that can warp the mind. Hands-on research is the most efficient, but when exposed to the raw element, my assistants age through their entire lives in the blink of an eye—and they aren’t even courteous enough to get up again after they expire. It’s exasperating! Working alone has been slowing my research tremendously.[1]