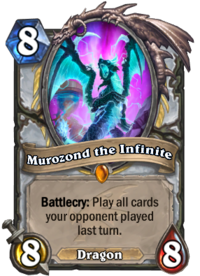 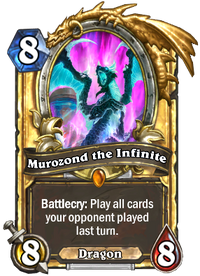 "Well, I'm glad YOU knew what I should be doing this turn."

For the Taverns of Time minion, see Murozond.

Murozond the Infinite is a legendary priest minion card, from the Descent of Dragons set.

Murozond the Infinite can be obtained through Descent of Dragons card packs, or through crafting.

Murozond possesses a respectable statline and his ability can give large amounts of value by copying an opponent's late-game plays. Generally, his effect is best used to copy an opponent's attempts to gain value by negating their card advantage, or to reverse an opponent's attempts to retake the board, ideally by trading off their minions before stealing them with Murozond. However, if your opponent makes a large tempo play that puts numerous minions on board, copying them with Murozond may be too slow to make a difference as your opponent gets to attack first with those minions.

In Wild, Murozond creates a strong combo with King Togwaggle. When your opponent plays the King's Ransom, Murozond can allow you to play it again and swap decks back.

Murozond is a corrupted future version of Nozdormu, found in End Time, a bleak alternate future in which Deathwing succeeded in destroying Azeroth.

Murozond is a future counterpart of Aspect of Time, Nozdormu, leader of the Infinite dragonflight. Using the Hourglass of Time, he managed to interfere with his past counterpart's efforts to send heroes to the past, which would result in a change of the bleak future, in which the maddened wyrm made his lair.

The master of the Infinite dragonflight tasked Aeonus to oversee the disruption of key moments in the true timeway.