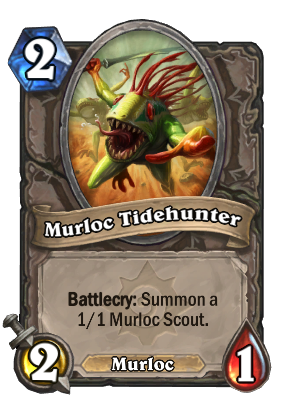 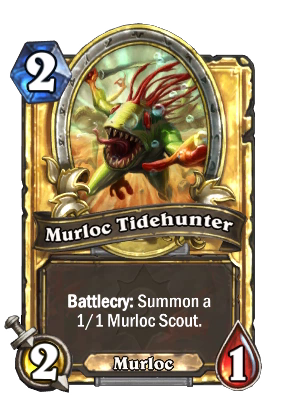 "Death will rise, from the tides!"

Murloc Tidehunter is a neutral murloc minion card, inducted into the Legacy set, formerly from the Basic set. Its Battlecry summons a 1/1 Murloc Scout. 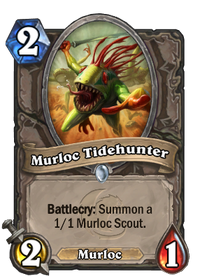 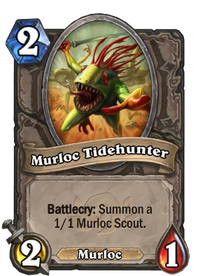 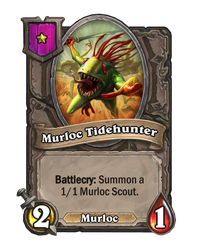 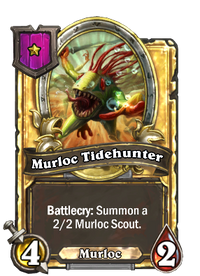 Two copies of regular and golden Murloc Tidehunter are automatically given after the player completes the Ranked's New player experience system, unlocking Wild and Classic format.

Two copies of regular Murloc Tidehunter (Core) are obtained for raising sum of all your class levels to 1.

Two copies of golden Murloc Tidehunter (Core) are obtained for winning 500 games across all classes.

Murloc Tidehunter (Core) is uncraftable and cannot be crafted or disenchanted. 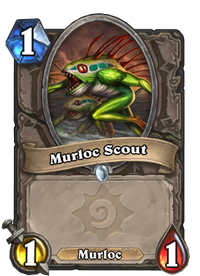 The Murloc Tidehunter is a cheap way to fill up on murlocs. When summoned, he brings along a 1/1 murloc as well, summoning two murlocs for the price of one. If both murlocs survive to the next turn, they are good targets for buffs. Murloc Warleader can buff both of them for +4 total Attack, with the same going for Coldlight Seer but for Health.

Bilefin Tidehunter is the corrupted version of this minion.