This article is using {{Card template}}.
See Help:Style guide/Card for how to edit this kind of article.
Edit this article
Murloc Tidecaller
475 • EX1_509
Regular 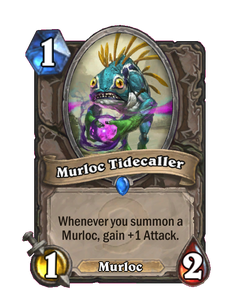 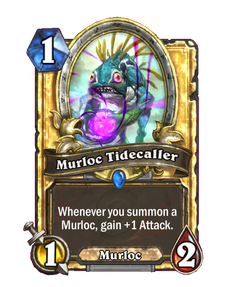 This guy gets crazy strong at family reunions. 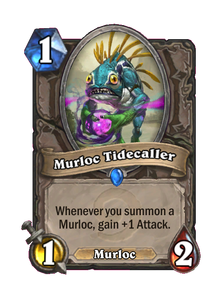 Murloc Tidecaller is a rare neutral minion card, inducted into the Legacy set, formerly from the Classic set. 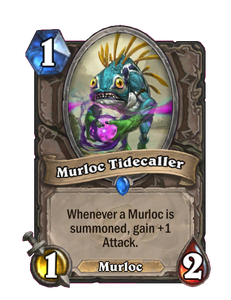 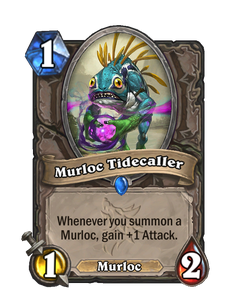 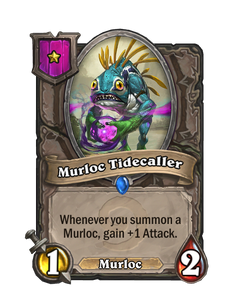 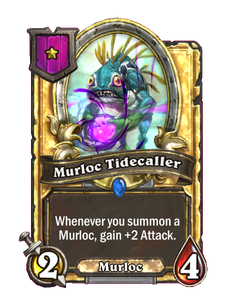 Two copies of regular Murloc Tidecaller are obtained for raising sum of all your class levels to 22.

Two copies of golden Murloc Tidecaller (Core) are obtained for winning 1000 games across all classes.

Murloc Tidecaller (Core) is uncraftable and cannot be crafted or disenchanted.

As a one mana minion benefiting from other summoned minions of the same sub-type, this card is best played on turn one as it has 2 health which can be a little difficult to remove at turn 1 for opponents. Following it up with a strong turn two play like Murloc Tidehunter or Rockpool Hunter can create a huge early game advantage. This card can easily get out of hand, and can be quite difficult and costly to take out if the player is allowed to build a board of murlocs as early as turn 3.

'Tidecaller' seems to refer to a specific role or class, with the title found among many types of murloc, and even other race such as the makrura. In World of Warcraft, the specific name "Murloc Tidecaller" is used by a type of level 16 murloc found in the Redridge Mountains.