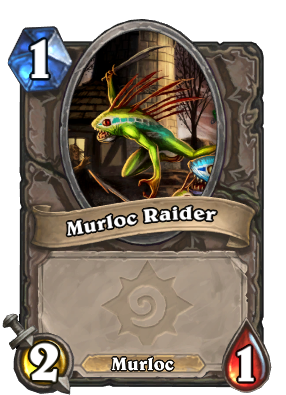 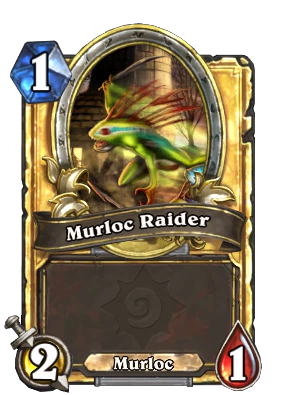 Murloc Raider is a neutral minion card, inducted into the Legacy set, formerly from the Basic set. 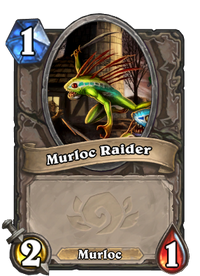 Two copies of regular and golden Murloc Raider are automatically given after the player completes the Ranked's New player experience system, unlocking Wild and Classic format.

Murloc Raider is a cheap murloc minion that is an easy addition to any Murloc deck. Its low stats and lack of additional abilities are compensated for by its synergy with effects such as Murloc Warleader and Grimscale Oracle.

However, due to lacking any effects and the card by itself having very low impact, it's generally outclassed even in most murloc decks. Other cards like Murloc Tidecaller and Grimscale Chum serve as superior alternatives.

The murloc is a bipedal, amphibious humanoid race residing along coastlines, lakeshores, and riverbeds. Murlocs possess bulbous bodies, large mouths lined with rows of sharp fangs, and slime-coated skin. Individuals range in coloration from turquoise to darkish grey, while their heights vary from 3-1/2 feet to 6 feet. Depending on the variety, murlocs may lean towards a closer resemblance to frogs or to fish; the iconic green murloc, for example, has coloration similar the Cuban Tree frog. Murlocs tend to dwell in amply-populated coastal settlements, and it is unusual to find individuals wandering too far from their compatriots. Players looking to engage murlocs should be wary of their surroundings; the creatures often lurk out of sight beneath the surface of the water. This tendency, coupled with their large social aggro radius, can often lead to larger pulls.