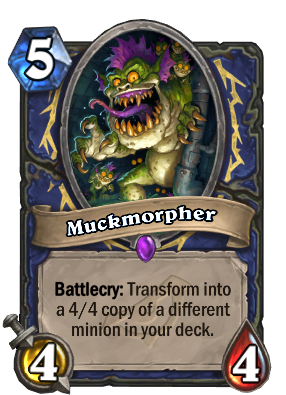 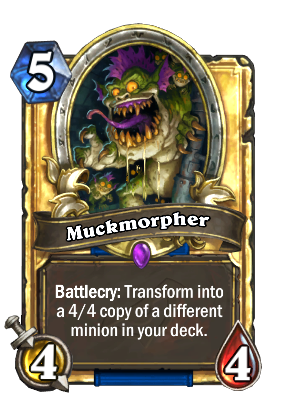 Battlecry: Transform into a 4/4 copy of a different minion in your deck.
Flavor text

Muckmorpher is an epic shaman minion card, from the Rise of Shadows set.

Muckmorpher can be obtained through Rise of Shadows card packs, or through crafting.

When planned right and with proper deckbuilding, Muckmorpher can be used to summon minions that have high Mana cost but possess powerful non-Battlecry effects, such as Al'Akir the Windlord, Walking Fountain, or Big Bad Archmage. Muckmorpher also combos well with Ancestral Spirit, reviving into a full-statted version of whatever it copied, or Big Bad Voodoo to transform into a full-statted minion of another potentially stronger minion. Wild format has even more options for Muckmorpher to target, like Ragnaros the Firelord, Kel'Thuzad, Y'Shaarj, Rage Unbound, The Lich King, etc.