This article is using {{Card template}}.
See Help:Style guide/Card for how to edit this kind of article.
Edit this article
Mr. Bigglesworth
2157 • NAX15_05
Regular 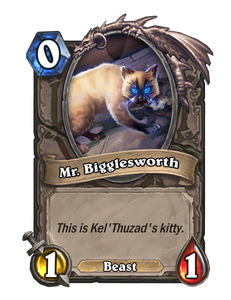 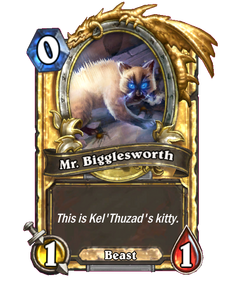 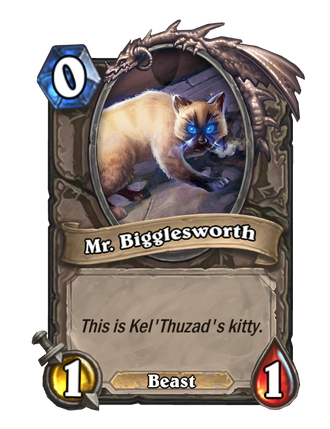 Mr. Bigglesworth is an uncollectible boss minion card, seen in the Kel'Thuzad encounter in Curse of Naxxramas.

If a player uses

Animal Companion during the encounter, Mr. Bigglesworth will be summoned in place of the usual uncollectible Beasts. If 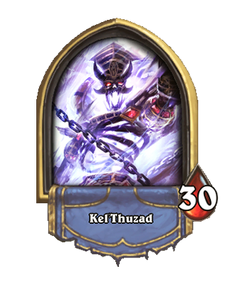 The last living creature in Naxxramas, this cat is said to be the last thread connecting Kel'thuzad to his mortal life. It is said that any who dare to harm a hair on his head doom themselves to... wait a second, what is he doing on there? *pounds on the display a few times.* Well, nevermind. I'm sure no one would be foolish enough to lay a hand on Kel'thuzad's precious pet.
- Commander Eligor Dawnbringer

Mr. Bigglesworth was originally intended to be a collectible reward from the Curse of Naxxramas adventure. He was originally designed as a 0 Mana 0/1 minion with Charge.[3]