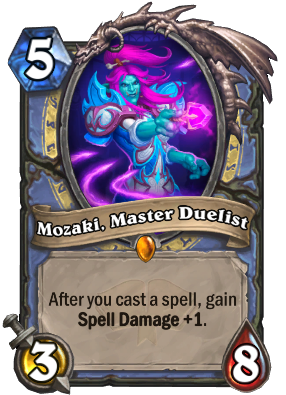 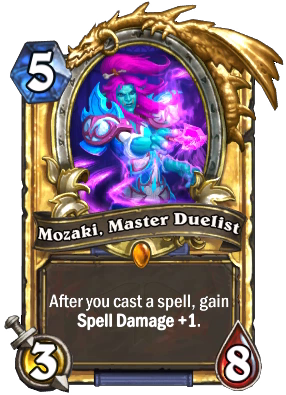 After you cast a spell, gain Spell Damage +1.
Flavor text

Treats her students like her peers, which means defeating them in one-sided duels all day long.

Mozaki, Master Duelist can be obtained through Scholomance Academy card packs, through crafting, or as an Arena reward.

Mozaki is one of the most powerful Burst cards Mage has seen to date. Her ramping spell damage ability is best used in combination with large combos of cheap spells and mana reductions.

The intention is generally one or more large spellcasting sequences that greatly ramp up her Spell Damage, finishing it with damaging spells such as Arcane Missiles, Runed Orb, Frostbolt, Fireball, Ice Lance and so on. She enables brutal spell damage like Malygos, but can often ramp past even Malygos' damage for far less mana. When paired with Ras Frostwhisper or Arcane Explosion, her combo can be used for board clears as well.

To achieve these combos, Sorcerer's Apprentice, Conjure Mana Biscuit, and Incanter's Flow are essential for mana cheating and extra spellcasts. Cheap draw spells may be used to get more cards to extend the combo, such as Refreshing Spring Water, Arcane Intellect, and Research Project - and especially Cram Session, which can ramp into such high levels of draw that card burn and/or fatigue due to overdraw become real concerns. Cheap spells that generate more cheap spells, such as Ray of Frost and Magic Trick, are often used to boost her damage before the combo is completed. It is also important to note, however, that - until a spell is cast - Mozaki has zero spell damage, and is simply a 3/8 body. Do not cast spells or effects that depend on her spell damage until one or more other spells have been cast to "prime" her.

Because she is relatively easy to remove, and decks featuring her are often built specifically to use her combo as a primary win condition, she is usually held in hand until one is ready to win the game with her. As with any game-winning minion, beware of effects like Dirty Rat, Deathlord, and Hecklebot which can expose her to removal prematurely.

Mozaki is or was an ice troll mage who was a Dueling instructor at the Scholomance Academy under Headmaster Kel'Thuzad while he was still human, and is unique to Hearthstone. She appears to be wearing the Frostfire Regalia, one of the first armor sets for mages during classic World of Warcraft.