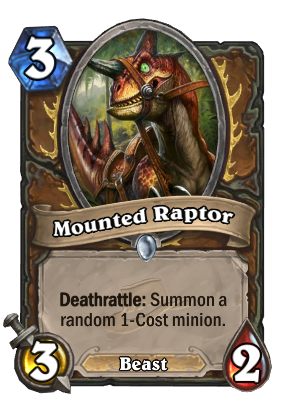 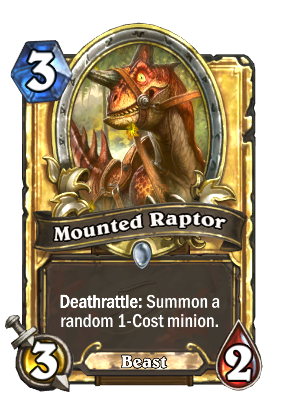 Mounted Raptor is a common druid minion card, from the League of Explorers set.

Two copies of regular Mounted Raptor are obtained by completing the druid Class Challenge in The League of Explorers, unlocked upon completing the adventure's second wing, Uldaman.

As a Wild format card, both regular and golden versions of Mounted Raptor can also be crafted for the following amounts:

Like Harvest Golem this is a "sticky" minion that retains some field presence after it dies. Can be fairly strong in a Beast, combo, or token druid deck.

It can be considered a more aggressive version of Harvest Golem, being a 3/2 instead of a 2/3. Its main problem is the unpredictability of the minion it summons with its Deathrattle, which can be any collectible 1-cost minion from any class. In the best case, you can get an Injured Kvaldir at full health, or a Flame Imp without receiving damage to your hero. In the worst case, you can get an undercosted 1/1 that is nearly useless without its Battlecry or in-hand effect, such as Elven Archer, Forbidden Ancient, or Shifter Zerus.

The below table lists all 1-cost collectible minions in Wild format, representing the range of possible minions summoned by Mounted Raptor's Deathrattle.

The concept of this card is that the Raptor is ridden by a 1-cost minion, who upon the Raptor's defeat will leap off and join the battle.[1]