This article is using {{Card template}}.
See Help:Style guide/Card for how to edit this kind of article.
Edit this article
Mountain Giant
993 • EX1_105
Regular 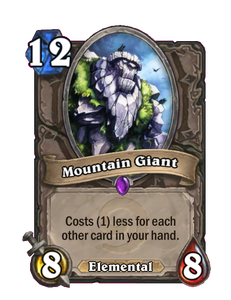 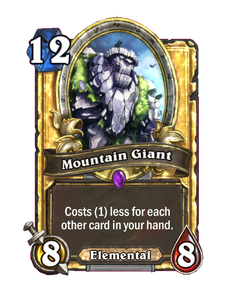 His mother said that he was just big boned. 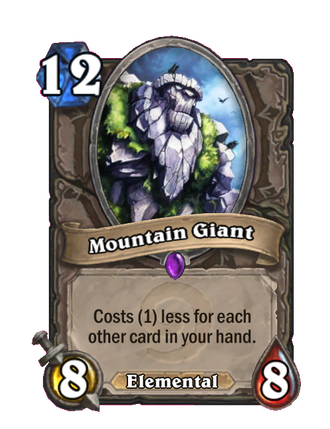 Mountain Giant is an epic neutral minion card, inducted into the Legacy set, formerly from the Classic and Hall of Fame sets. 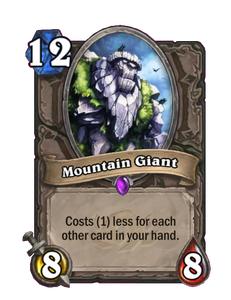 This card works well in card draw decks, due to its cost being reduced by the size of the player's hand. It also works well with Warlock Hero Power.

If you need just one more Mana Crystal in order to summon the Mountain Giant, do not use

The Coin (unless you have a

Gadgetzan Auctioneer or the enemy has

Trade Prince Gallywix on the board). The Coin is a card; playing it will increase the cost of the Giant by one.

When planning a turn involving Mountain Giants, do not forget that the cost will increase with every card played (unless the card draws others). Therefore, it is often wise to play Mountain Giant as the first card of the turn, or after any draw effects have been activated. This is particularly easy to forget when playing two Mountain Giants in a row: The second one will cost one more than the first. For instance, with a full hand, two Mountain Giants will each show 3 mana cost, but once the first is played the second will cost 4, resulting in a total cost of 7 for the pair.

Mountain giants are colossal creatures, crafted by the titans when the world was young, composed of living stone and stout flora. Benevolent and solitary by nature, the mountain giants have awakened to find that the tranquil world they once helped to shape has become a hectic battlefield of fire and sorrow. Now the mountain giants have pledged their courage and strength to the night elves' cause — and stand ready to banish the last remnants of the Burning Legion from the world. These massive melee units can take incredible amounts of punishment from attackers.