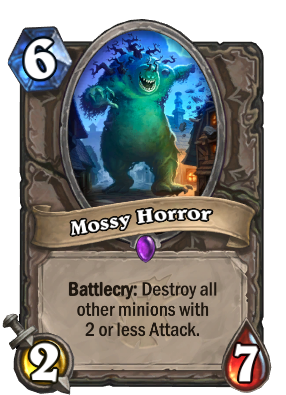 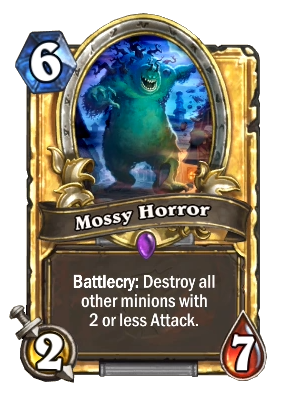 Battlecry: Destroy all other minions with 2 or less Attack.
Flavor text

The hills have eyes. And teeth. Pretty bad breath, too.

Mossy Horror is an epic neutral minion card, from the The Witchwood set.

Mossy Horror can be obtained through The Witchwood card packs, or through crafting.

Mossy Horror is functionally equivalent to Shadow Word: Horror but costing 2 more mana on a 2/7 body. This card works best in decks with plenty of removal and few win conditions that intend to stall the game for long periods of time.

Mossy Horror is most effective as a powerful tool to destroy cards or strategies that revolve around several small minions. It is able to remove minions spawned with Spreading Plague or Giggling Inventor entirely. Additionally, it can be used to destroy 1/3 Voidwalkers that spawn from Voidlord, and minions that spawn from Call to Arms with 2 or less Attack. Finally, it can be paired with cards that reduce enemy minion attack such as Curse of Weakness.

It can also double as an "egg activator" while also removing smaller threats on your opponent's side.

This card works well with Lady in White to produce a 6 mana 7/7 card.

Mossy Horror does not resemble any creature previously seen in the Warcraft universe, and is unique to Hearthstone.